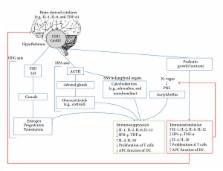 Currently, it is generally accepted that multiple sclerosis (MS) is a complex multifactorial disease involving genetic and environmental factors affecting the autoreactive immune responses that lead to damage of myelin. In this respect, intrinsic or extrinsic factors such as emotional, psychological, traumatic, or inflammatory stress as well as a variety of other lifestyle interventions can influence the neuroendocrine system. On its turn, it has been demonstrated that the neuroendocrine system has immunomodulatory potential. Moreover, the neuroendocrine and immune systems communicate bidirectionally via shared receptors and shared messenger molecules, variously called hormones, neurotransmitters, or cytokines. Discrepancies at any level can therefore lead to changes in susceptibility and to severity of several autoimmune and inflammatory diseases. Here we provide an overview of the complex system of crosstalk between the neuroendocrine and immune system as well as reported dysfunctions involved in the pathogenesis of autoimmunity, including MS. Finally, possible strategies to intervene with the neuroendocrine-immune system for MS patient management will be discussed. Ultimately, a better understanding of the interactions between the neuroendocrine system and the immune system can open up new therapeutic approaches for the treatment of MS as well as other autoimmune diseases.

Dopamine receptors: from structure to function.

Margaret S. Robinson,  C Missale,  Robert Nash … (1997)
The diverse physiological actions of dopamine are mediated by at least five distinct G protein-coupled receptor subtypes. Two D1-like receptor subtypes (D1 and D5) couple to the G protein Gs and activate adenylyl cyclase. The other receptor subtypes belong to the D2-like subfamily (D2, D3, and D4) and are prototypic of G protein-coupled receptors that inhibit adenylyl cyclase and activate K+ channels. The genes for the D1 and D5 receptors are intronless, but pseudogenes of the D5 exist. The D2 and D3 receptors vary in certain tissues and species as a result of alternative splicing, and the human D4 receptor gene exhibits extensive polymorphic variation. In the central nervous system, dopamine receptors are widely expressed because they are involved in the control of locomotion, cognition, emotion, and affect as well as neuroendocrine secretion. In the periphery, dopamine receptors are present more prominently in kidney, vasculature, and pituitary, where they affect mainly sodium homeostasis, vascular tone, and hormone secretion. Numerous genetic linkage analysis studies have failed so far to reveal unequivocal evidence for the involvement of one of these receptors in the etiology of various central nervous system disorders. However, targeted deletion of several of these dopamine receptor genes in mice should provide valuable information about their physiological functions.

Christine Metz,  Marilou Justiniani,  Kevin J. Tracey … (2004)
Physiological anti-inflammatory mechanisms can potentially be exploited for the treatment of inflammatory disorders. Here we report that the neurotransmitter acetylcholine inhibits HMGB1 release from human macrophages by signaling through a nicotinic acetylcholine receptor. Nicotine, a selective cholinergic agonist, is more efficient than acetylcholine and inhibits HMGB1 release induced by either endotoxin or tumor necrosis factor-alpha (TNF-alpha). Nicotinic stimulation prevents activation of the NF-kappaB pathway and inhibits HMGB1 secretion through a specific 'nicotinic anti-inflammatory pathway' that requires the alpha7 nicotinic acetylcholine receptor (alpha7nAChR). In vivo, treatment with nicotine attenuates serum HMGB1 levels and improves survival in experimental models of sepsis, even when treatment is started after the onset of the disease. These results reveal acetylcholine as the first known physiological inhibitor of HMGB1 release from human macrophages and suggest that selective nicotinic agonists for the alpha7nAChR might have therapeutic potential for the treatment of sepsis.