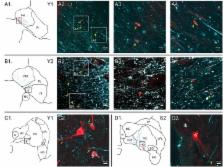 Neuropsychological and neuroimaging studies have suggested the presence of a fast, subcortical route for the processing of emotionally-salient visual information in the primate brain. This putative pathway consists of the superior colliculus (SC), pulvinar and amygdala. While the presence of such a pathway has been confirmed in sub-primate species, it has yet to be documented in the primate brain using conventional anatomical methods. We injected retrograde tracers into the amygdala and anterograde tracers into the colliculus, and examined regions of colocalization of these signals within the pulvinar of the macaque. Anterograde tracers injected into the SC labeled axonal projections within the pulvinar, primarily within the oral, lateral and medial subdivisions. These axonal projections from the colliculus colocalized with cell bodies within the pulvinar that were labeled by retrograde tracer injected into the lateral amygdala. This zone of overlap was most notable in the medial portions of the medial (PM), oral (PO) and inferior pulvinar (PI), and was often densely concentrated in the vicinity of the brachium of the SC. These data provide an anatomical basis for the previously suggested pathway mediating fast processing of emotionally salient information.

S McInerney,  Paul J Whalen,  S. Rauch … (1998)
Functional magnetic resonance imaging (fMRI) of the human brain was used to study whether the amygdala is activated in response to emotional stimuli, even in the absence of explicit knowledge that such stimuli were presented. Pictures of human faces bearing fearful or happy expressions were presented to 10 normal, healthy subjects by using a backward masking procedure that resulted in 8 of 10 subjects reporting that they had not seen these facial expressions. The backward masking procedure consisted of 33 msec presentations of fearful or happy facial expressions, their offset coincident with the onset of 167 msec presentations of neutral facial expressions. Although subjects reported seeing only neutral faces, blood oxygen level-dependent (BOLD) fMRI signal in the amygdala was significantly higher during viewing of masked fearful faces than during the viewing of masked happy faces. This difference was composed of significant signal increases in the amygdala to masked fearful faces as well as significant signal decreases to masked happy faces, consistent with the notion that the level of amygdala activation is affected differentially by the emotional valence of external stimuli. In addition, these facial expressions activated the sublenticular substantia innominata (SI), where signal increases were observed to both fearful and happy faces--suggesting a spatial dissociation of territories that respond to emotional valence versus salience or arousal value. This study, using fMRI in conjunction with masked stimulus presentations, represents an initial step toward determining the role of the amygdala in nonconscious processing.

C Bradley,  Richard T. Born (2004)
The small visual area known as MT or V5 has played a major role in our understanding of the primate cerebral cortex. This area has been historically important in the concept of cortical processing streams and the idea that different visual areas constitute highly specialized representations of visual information. MT has also proven to be a fertile culture dish--full of direction- and disparity-selective neurons--exploited by many labs to study the neural circuits underlying computations of motion and depth and to examine the relationship between neural activity and perception. Here we attempt a synthetic overview of the rich literature on MT with the goal of answering the question, What does MT do?