Taxonomy and Biogeography of Apomixis in Angiosperms and Associated Biodiversity Characteristics 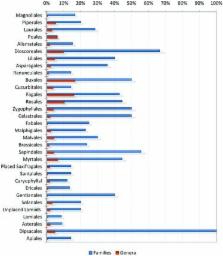 Apomixis in angiosperms is asexual reproduction from seed. Its importance to angiospermous evolution and biodiversity has been difficult to assess mainly because of insufficient taxonomic documentation. Thus, we assembled literature reporting apomixis occurrences among angiosperms and transferred the information to an internet database ( http://www.apomixis.uni-goettingen.de). We then searched for correlations between apomixis occurrences and well-established measures of taxonomic diversity and biogeography. Apomixis was found to be taxonomically widespread with no clear tendency to specific groups and to occur with sexuality at all taxonomic levels. Adventitious embryony was the most frequent form (148 genera) followed by apospory (110) and diplospory (68). All three forms are phylogenetically scattered, but this scattering is strongly associated with measures of biodiversity. Across apomictic-containing orders and families, numbers of apomict-containing genera were positively correlated with total numbers of genera. In general, apomict-containing orders, families, and subfamilies of Asteraceae, Poaceae, and Orchidaceae were larger, i.e., they possessed more families or genera, than non-apomict-containing orders, families or subfamilies. Furthermore, many apomict-containing genera were found to be highly cosmopolitan. In this respect, 62% occupy multiple geographic zones. Numbers of genera containing sporophytic or gametophytic apomicts decreased from the tropics to the arctic, a trend that parallels general biodiversity. While angiosperms appear to be predisposed to shift from sex to apomixis, there is also evidence of reversions to sexuality. Such reversions may result from genetic or epigenetic destabilization events accompanying hybridization, polyploidy, or other cytogenetic alterations. Because of increased within-plant genetic and genomic heterogeneity, range expansions and diversifications at the species and genus levels may occur more rapidly upon reversion to sexuality. The significantly-enriched representations of apomicts among highly diverse and geographically-extensive taxa, from genera to orders, support this conclusion.

THE RELATION OF RECOMBINATION TO MUTATIONAL ADVANCE.

Color versions of one or more of the figures in the article can be found online at www.tandfonline.com/bpts.