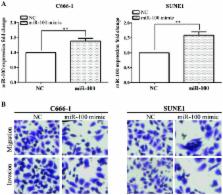 Nasopharyngeal carcinoma (NPC) is a cancer pattern that often develops in the epithelial cells of the nasopharynx. miR-100 is a miRNA that has been identified in a number of cancers. The aim of the present study was to investigate whether miR-100 can affect cell migration and proliferation of NPC by targeting insulin-like growth factor 1 receptor (IGF1R). Western blot analysis was used to determine the protein levels of genes. The reverse transcription-quantitative PCR (RT-qPCR) was used to detect the expression level of miR-100 and IGF1R. Transwell assay was used to detect the migration and invasion of cell lines. The luciferase reporter assay was employed to confirm the target gene of miR-100. miR-100 expression was highly reduced in NPC tissues compared with non-cancerous tissues. Overexpression of miR-100 significantly inhibited the migration and invasion of NPC cell lines C666-1 and SUNE1. IGF1R was a downstream target of miR-100 and was downregulated by miR-100. Knockdown of IGF1R by siRNA suppressed cell proliferation of the C666-1 cell line. The newly identified miR-100/IGF1R axis offers novel biomarkers for the therapeutic intervention of NPC treatment. As a result, our findings suggest that miR-100 plays an important role in suppressing migration and invasion of NPC cells and suppresses IGF1R expression by directly targeting its 3′-UTR. It is suggested that miR-100 may be a novel therapeutic target of microRNA-mediated suppression of cell migration and invasion in NPC. However, the role of the miR-100/IGF1R axis in NPC progression needs further investigation.

Yu Li,  Kris V Kowdley (2012)
MicroRNAs (miRNAs) are a class of short non-coding RNA molecules that have attracted tremendous attention from the biological and biomedical research communities over the past decade. With over 1900 miRNAs discovered in humans to date, many of them have already been implicated in common human disorders. Facilitated by high-throughput genomics and bioinformatics in conjunction with traditional molecular biology techniques and animal models, miRNA research is now positioned to make the transition from laboratories to clinics to deliver profound benefits to public health. Herein, we overview the progress of miRNA research related to human diseases, as well as the potential for miRNA to becoming the next generation of diagnostics and therapeutics.

Wei-Hua Jia,  Qi-Hong Huang,  Jian Liao … (2006)
Background Nasopharyngeal carcinoma (NPC) is a rare malignancy in most parts of the world but is common in southern China. A recent report from the Hong Kong Cancer Registry, a high-risk area for NPC in southern China, showed that incidence rate decreased by 29% for males and by 30% for females from 1980–1999, while mortality rate decreased by 43% for males and 50% for females. Changing environmental risk factors and improvements in diagnosis and treatment were speculated to be the major factors contributing to the downward trend of the incidence and mortality rates of NPC. To investigate the secular trends in different Cantonese populations with different socio-economic backgrounds and lifestyles, we report the incidences and mortality rates from two population-based cancer registries in Sihui and Cangwu counties from 1978–2002. Methods Incidence and mortality rates were aggregated by 5-year age groups and 5 calendar years. To adjust for the effect of difference in age composition for different periods, the total and age-specific rates of NPC incidence and mortality rate were adjusted by direct standardization according to the World Standard Population (1960). The Estimated Annual Percentage Change (EAPC) was used as an estimate of the trend. Results The incidence rate of NPC has remained stable during the recent two decades in Sihui and in females in Cangwu, with a slight increase observed in males in Cangwu from 17.81 to 19.76 per 100,000. The incidence rate in Sihui is 1.4–2.0 times higher during the corresponding years than in Cangwu, even though the residents of both areas are of Cantonese ethnicity. A progressive decline in mortality rate was observed in females only in Sihui, with an average reduction of 6.3% (p = 0.016) per five-year period. Conclusion To summarize, there is great potential to work in the area of NPC prevention and treatment in southern China to decrease NPC risk and improve survival risk rates in order to reduce M:I ratios. Future efforts on effective prevention, early detection and treatment strategies were also discussed in this paper. Furthermore, the data quality and completeness also need to be improved.