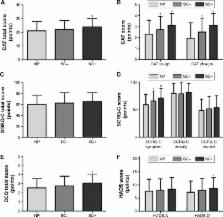 Spontaneous sputum production occurs in a subset of COPD patients; however, its clinical relevance has not been established. Differences in health status and clinical outcomes between patients with and without positive sputum cultures are unknown.

Spontaneous sputum production is common in COPD. Particularly, patients with positive cultures have worse health status and more symptoms of depression. Impact on disease progression and long-term outcomes remain to be established.

Jace W. Jones,  Yeon-Mok Oh (2005)
The SGRQ is a disease-specific measure of health status for use in COPD. A number of methods have been used for estimating its minimum clinically important difference (MCID). These include both expert and patient preference-based estimates. Anchor-based methods have also been used. The calculated MCID from those studies was consistently around 4 units, regardless of assessment method. By contrast, the MCID calculated using distribution-based methods varied across studies and permitted no consistent estimate. All measurements of clinical significance contain sample and measurement error. They also require value judgements, if not about the calculation of the MCID itself then about the anchors used to estimate it. Under these circumstances, greater weight should be placed upon the overall body of evidence for an MCID, rather than one single method. For that reason, estimates of MCID should be used as indicative values. Methods of analysing clinical trial results should reflect this, and use appropriate statistical tests for comparison with the MCID. Treatments for COPD that produced an improvement in SGRQ of the order of 4 units in clinical trials have subsequently found wide acceptance once in clinical practice, so it seems reasonable to expect any new treatment proposed for COPD to produce an advantage over placebo that is not significantly inferior to a 4-unit difference.

Global strategy for the diagnosis, management, and prevention of chronic obstructive pulmonary disease

The chronic bronchitic phenotype of COPD: an analysis of the COPDGene Study.

Victor Kim,  MeiLan K Han,  Gwendolyn Vance … (2011)
Chronic bronchitis (CB) in patients with COPD is associated with an accelerated lung function decline and an increased risk of respiratory infections. Despite its clinical significance, the chronic bronchitic phenotype in COPD remains poorly defined. We analyzed data from subjects enrolled in the Genetic Epidemiology of COPD (COPDGene) Study. A total of 1,061 subjects with GOLD (Global Initiative for Chronic Obstructive Lung Disease) stage II to IV were divided into two groups: CB (CB+) if subjects noted chronic cough and phlegm production for ≥ 3 mo/y for 2 consecutive years, and no CB (CB-) if they did not. There were 290 and 771 subjects in the CB+ and CB- groups, respectively. Despite similar lung function, the CB+ group was younger (62.8 ± 8.4 vs 64.6 ± 8.4 years, P = .002), smoked more (57 ± 30 vs 52 ± 25 pack-years, P = .006), and had more current smokers (48% vs 27%, P < .0001). A greater percentage of the CB+ group reported nasal and ocular symptoms, wheezing, and nocturnal awakenings secondary to cough and dyspnea. History of exacerbations was higher in the CB+ group (1.21 ± 1.62 vs 0.63 ± 1.12 per patient, P < .027), and more patients in the CB+ group reported a history of severe exacerbations (26.6% vs 20.0%, P = .024). There was no difference in percent emphysema or percent gas trapping, but the CB+ group had a higher mean percent segmental airway wall area (63.2% ± 2.9% vs 62.6% ± 3.1%, P = .013). CB in patients with COPD is associated with worse respiratory symptoms and higher risk of exacerbations. This group may need more directed therapy targeting chronic mucus production and smoking cessation not only to improve symptoms but also to reduce risk, improve quality of life, and improve outcomes. ClinicalTrials.gov; No.: NCT00608764; URL: www.clinicaltrials.gov.