A new species of buffalo leech in the genus Hirudinaria Whitman, 1886 (Arhynchobdellida, Hirudinidae) from Thailand 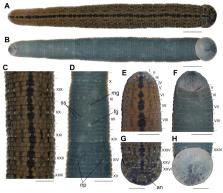 Hirudinaria manillensis (Lesson, 1842), commonly known as the buffalo leech, shows a polymorphism of two ventral colorations. The green color morph has a plain green ventral surface and the red color morph has a brick-red ventral surface with two black submarginal stripes. Based on molecular and morphological evidence in the present study, these two color morphs were revealed as two different species. The red color morph fits well with the description of H. manillensis , while the green color morph showed some distinctions, and therefore is described herein as Hirudinaria thailandica Jeratthitikul & Panha, sp. nov. The new species can be distinguished from its congeners by the dark greenish or dark olive ventral surface and a round atrium with ventral insertion of ejaculatory ducts in the male reproductive organ. A phylogenetic tree based on concatenated data of COI and 28S genes supported the new species and further indicated it as a sister species to H. bpling Phillips, 2012.

Success of Phylogenetic Methods in the Four-Taxon Case

Yale J Passamaneck,  Christoffer Schander,  Kenneth M. Halanych (2004)
The Mollusca represent one of the most morphologically diverse animal phyla, prompting a variety of hypotheses on relationships between the major lineages within the phylum based upon morphological, developmental, and paleontological data. Analyses of small-ribosomal RNA (SSU rRNA) gene sequence have provided limited resolution of higher-level relationships within the Mollusca. Recent analyses suggest large-subunit (LSU) rRNA gene sequences are useful in resolving deep-level metazoan relationships, particularly when combined with SSU sequence. To this end, LSU (approximately 3.5 kb in length) and SSU (approximately 2 kb) sequences were collected for 33 taxa representing the major lineages within the Mollusca to improve resolution of intraphyletic relationships. Although the LSU and combined LSU+SSU datasets appear to hold potential for resolving branching order within the recognized molluscan classes, low bootstrap support was found for relationships between the major lineages within the Mollusca. LSU+SSU sequences also showed significant levels of rate heterogeneity between molluscan lineages. The Polyplacophora, Gastropoda, and Cephalopoda were each recovered as monophyletic clades with the LSU+SSU dataset. While the Bivalvia were not recovered as monophyletic clade in analyses of the SSU, LSU, or LSU+SSU, the Shimodaira-Hasegawa test showed that likelihood scores for these results did not differ significantly from topologies where the Bivalvia were monophyletic. Analyses of LSU sequences strongly contradict the widely accepted Diasoma hypotheses that bivalves and scaphopods are closely related to one another. The data are consistent with recent morphological and SSU analyses suggesting scaphopods are more closely related to gastropods and cephalopods than to bivalves. The dataset also presents the first published DNA sequences from a neomeniomorph aplacophoran, a group considered critical to our understanding of the origin and early radiation of the Mollusca. Copyright 2004 Elsevier Inc.

the Center of Excellence on Biodiversity, Thailand, JSPS KAKENHI Grants