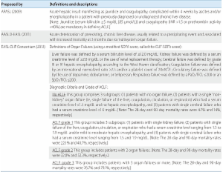 Publisher: The Korean Association for the Study of the Liver

Acute-on-chronic liver failure (ACLF) is an increasingly recognized distinct disease entity encompassing an acute deterioration of liver function in patients with chronic liver disease. Although there are no widely accepted diagnostic criteria for ACLF, the Asia.Pacific Association for the Study of the Liver (APASL) and the American Association for the Study of Liver Disease and the European Association for the Study of the Liver (AASLD/EASL) consensus definitions are commonly used. It is obvious that the APASL and the AASLD/EASL definitions are based on fundamentally different features. Two different definitions in two different parts of the world hamper the comparability of studies. Recently, the EASL-Chronic Liver Failure Consortium proposed new diagnostic criteria for ACLF based on analyses of patients with organ failure. There are areas of uncertainty in defining ACLF, such as heterogeneity of ACLF, ambiguity in qualifying underlying liver disease, argument for infection or sepsis as a precipitating event, etc. Although the exact pathogenesis of ACLF remains to be elucidated, alteration of host response to injury, infection, and unregulated inflammation play important roles. The predisposition, infection/inflammation, response, organ failure (PIRO) concept used for sepsis might be useful in describing the pathophysiology and clinical categories for ACLF. Treatment strategies are limited to organ support but better understanding of the pathophysiology is likely to lead to discovery of novel biomarkers and therapeutic strategies in the future.

American College of Chest Physicians/Society of Critical Care Medicine Consensus Conference: definitions for sepsis and organ failure and guidelines for the use of innovative therapies in sepsis.

(1992)
To define the terms "sepsis" and "organ failure" in a precise manner. Review of the medical literature and the use of expert testimony at a consensus conference. American College of Chest Physicians (ACCP) headquarters in Northbrook, IL. Leadership members of ACCP/Society of Critical Care Medicine (SCCM). An ACCP/SCCM Consensus Conference was held in August of 1991 with the goal of agreeing on a set of definitions that could be applied to patients with sepsis and its sequelae. New definitions were offered for some terms, while others were discarded. Broad definitions of sepsis and the systemic inflammatory response syndrome were proposed, along with detailed physiologic variables by which a patient could be categorized. Definitions for severe sepsis, septic shock, hypotension, and multiple organ dysfunction syndrome were also offered. The use of severity scoring methods were recommended when dealing with septic patients as an adjunctive tool to assess mortality. Appropriate methods and applications for the use and testing of new therapies were recommended. The use of these terms and techniques should assist clinicians and researchers who deal with sepsis and its sequelae.