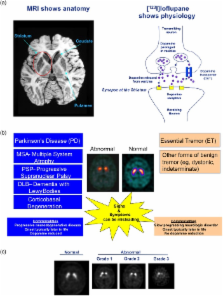 The diagnosis of movement disorders including Parkinson's disease (PD) and essential tremor is determined through clinical assessment. The difficulty with diagnosis of early PD has been highlighted in several recent clinical trials. Studies have suggested relatively high clinical diagnostic error rates for PD and essential tremor. This review was undertaken to clarify the utility of DaT-SPECT imaging with ( 123I)ioflupane (DaTSCAN or DaTscan or ( 123I)FP-CIT) in assisting practitioners in their clinical decision making by visualising the dopamine transporter in parkinsonian cases. In some patients with suspected parkinsonian syndromes, SPECT imaging with ( 123I)ioflupane is useful to assist in the diagnosis and to help guide prognosis and treatment decisions, including avoiding medications that are unlikely to provide benefit. Clinicians ordering ( 123I)ioflupane SPECT should be aware of its limitations and pitfalls and should order scans when there is diagnostic uncertainty or when the scan will be helpful in clinical decision making.

Accuracy of clinical diagnosis of idiopathic Parkinson's disease: a clinico-pathological study of 100 cases.

Ieuan A. Hughes,  J.-P. Lees,  L Kilford … (1992)
Few detailed clinico-pathological correlations of Parkinson's disease have been published. The pathological findings in 100 patients diagnosed prospectively by a group of consultant neurologists as having idiopathic Parkinson's disease are reported. Seventy six had nigral Lewy bodies, and in all of these Lewy bodies were also found in the cerebral cortex. In 24 cases without Lewy bodies, diagnoses included progressive supranuclear palsy, multiple system atrophy, Alzheimer's disease, Alzheimer-type pathology, and basal ganglia vascular disease. The retrospective application of recommended diagnostic criteria improved the diagnostic accuracy to 82%. These observations call into question current concepts of Parkinson's disease as a single distinct morbid entity.

The accuracy of diagnosis of parkinsonian syndromes in a specialist movement disorder service.

Emily A Lees,  Yoav Ben-Shlomo,  Ieuan A. Hughes … (2002)
We have reviewed the clinical and pathological diagnoses of 143 cases of parkinsonism seen by neurologists associated with the movement disorders service at The National Hospital for Neurology and Neurosurgery in London who came to neuropathological examination at the United Kingdom Parkinson's Disease Society Brain Research Centre, over a 10-year period between 1990 and the end of 1999. Seventy-three (47 male, 26 female) cases were diagnosed as having idiopathic Parkinson's disease (IPD) and 70 (42 male, 28 female) as having another parkinsonian syndrome. The positive predictive value of the clinical diagnosis for the whole group was 85.3%, with 122 cases correctly clinically diagnosed. The positive predictive value of the clinical diagnosis of IPD was extremely high, at 98.6% (72 out of 73), while for the other parkinsonian syndromes it was 71.4% (50 out of 70). The positive predictive values of a clinical diagnosis of multiple system atrophy (MSA) and progressive supranuclear palsy (PSP) were 85.7 (30 out of 35) and 80% (16 out of 20), respectively. The sensitivity for IPD was 91.1%, due to seven false-negative cases, with 72 of the 79 pathologically established cases being diagnosed in life. For MSA, the sensitivity was 88.2% (30 out of 34), and for PSP it was 84.2% (16 out of 19). The diagnostic accuracy for IPD, MSA and PSP was higher than most previous prospective clinicopathological series and studies using the retrospective application of clinical diagnostic criteria. The seven false-negative cases of IPD suggest a broader clinical picture of disease than previously thought acceptable. This study implies that neurologists with particular expertise in the field of movement disorders may be using a method of pattern recognition for diagnosis which goes beyond that inherent in any formal set of diagnostic criteria.

G. Deuschl,  P Bain,  M Brin (1997)
This is a proposal of the Movement Disorder Society for a clinical classification of tremors. The classification is based on the distinction between rest, postural, simple kinetic, and intention tremor (tremor during target-directed movements). Additional data from a medical history and the results of a neurologic examination can be combined into one of the following clinical syndromes defined in this statement: enhanced physiologic tremor, classical essential tremor (ET), primary orthostatic tremor, task- and position-specific tremors, dystonic tremor, tremor in Parkinson's disease (PD), cerebellar tremor, Holmes' tremor, palatal tremor, drug-induced and toxic tremor, tremor in peripheral neuropathies, or psychogenic tremor. Conditions such as asterixis, epilepsia partialis continua, clonus, and rhythmic myoclonus can be misinterpreted as tremor. The features distinguishing these conditions from tremor are described. Controversial issues are outlined in a comment section for each item and thus reflect the open questions that at present cannot be answered on a scientific basis. We hope that this statement provides a basis for better communication among clinicians working in the field and stimulates tremor research.