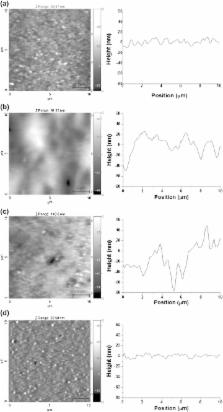 To analyze and compare several commercially available acrylic intraocular lenses (IOLs) with particular regard to their clinical significance, we examined the physicochemical and surface properties of four currently available acrylic IOLs using static water contact angle, atomic force microscopy (AFM), Raman spectroscopy, and differential scanning calorimetry (DSC) measurements. The hydrophobic acrylic IOLs, ZA9003, and MA60BM, had contact angles ranging from 77.9° ± 0.65° to 84.4° ± 0.09°. The contact angles in the hydrophilic acrylic (970C) and heparin-surface-modified (HSM) hydrophilic acrylic IOLs (BioVue) were 61.8° ± 0.45° and 69.7° ± 0.76°, respectively. The roughness of the IOL optic surface differed depending on the type of IOL ( p < 0.001). The surface roughness of BioVue had the lowest value: 5.87 ± 1.26 nm. This suggests that the BioVue IOL may lead to reduced cellular adhesion compared to the unmodified IOLs. All IOLs including those composed of acrylic optic materials from different manufacturers showed distinct Raman spectra peaks. The glass transition temperatures (T g) for the hydrophobic acrylic IOLs were between 12.5 and 13.8 °C. These results suggest that the intraoperative and postoperative behavior of an IOL can be predicted. This information is also expected to contribute greatly to the industrial production of reliable biocompatible IOLs.

Dependence of the glass transition temperature on heating and cooling rate

D Leaming (2004)
A survey of the members of the American Society of Cataract and Refractive Surgery (ASCRS) with a United States ZIP code was performed in July 2003. Approximately 15.5% (985) of the 6350 questionnaires were returned for analysis. Three main profile questions were used in the cross-tabulation: age of the respondent, geographic location, and volume of cataract surgery per month. The refractive surgical questions were cross-tabulated for the volume of laser in situ keratomileusis. Results of the survey were compared with those in previous surveys of ASCRS members.