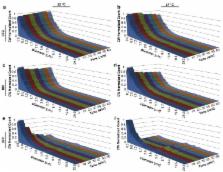 Recent efforts using perfluorocarbon (PFC) nanoparticles in conjunction with acoustic droplet vaporization has introduced the possibility of expanding the diagnostic and therapeutic capability of ultrasound contrast agents to beyond the vascular space. Our laboratories have developed phase-change nanoparticles (PCNs) from the highly volatile PFCs decafluorobutane (DFB, bp =-2 °C) and octafluoropropane (OFP, bp =-37 °C ) for acoustic droplet vaporization. Studies with commonly used clinical ultrasound scanners have demonstrated the ability to vaporize PCN emulsions with frequencies and mechanical indices that may significantly decrease tissue bioeffects. In addition, these contrast agents can be formulated to be stable at physiological temperatures and the perfluorocarbons can be mixed to modulate the balance between sensitivity to ultrasound and general stability. We herein discuss our recent efforts to develop finely-tuned diagnostic/molecular imaging agents for tissue interrogation. We discuss studies currently under investigation as well as potential diagnostic and therapeutic paradigms that may emerge as a result of formulating PCNs with low boiling point PFCs.

Regulation of transport pathways in tumor vessels: role of tumor type and microenvironment.

Vladimir P. Torchilin,  W Monsky,  Rishi K. Jain … (1998)
Novel anti-neoplastic agents such as gene targeting vectors and encapsulated carriers are quite large (approximately 100-300 nm in diameter). An understanding of the functional size and physiological regulation of transvascular pathways is necessary to optimize delivery of these agents. Here we analyze the functional limits of transvascular transport and its modulation by the microenvironment. One human and five murine tumors including mammary and colorectal carcinomas, hepatoma, glioma, and sarcoma were implanted in the dorsal skin-fold chamber or cranial window, and the pore cutoff size, a functional measure of transvascular gap size, was determined. The microenvironment was modulated: (i) spatially, by growing tumors in subcutaneous or cranial locations and (ii) temporally, by inducing vascular regression in hormone-dependent tumors. Tumors grown subcutaneously exhibited a characteristic pore cutoff size ranging from 200 nm to 1.2 microm. This pore cutoff size was reduced in tumors grown in the cranium or in regressing tumors after hormone withdrawal. Vessels induced in basic fibroblast growth factor-containing gels had a pore cutoff size of 200 nm. Albumin permeability was independent of pore cutoff size. These results have three major implications for the delivery of therapeutic agents: (i) delivery may be less efficient in cranial tumors than in subcutaneous tumors, (ii) delivery may be reduced during tumor regression induced by hormonal ablation, and (iii) permeability to a molecule is independent of pore cutoff size as long as the diameter of the molecule is much less than the pore diameter.

A L Klibanov,  Sophie Hernot (2008)
Ultrasound contrast agents, in the form of gas-filled microbubbles, are becoming popular in perfusion monitoring; they are employed as molecular imaging agents. Microbubbles are manufactured from biocompatible materials, they can be injected intravenously, and some are approved for clinical use. Microbubbles can be destroyed by ultrasound irradiation. This destruction phenomenon can be applied to targeted drug delivery and enhancement of drug action. The ultrasonic field can be focused at the target tissues and organs; thus, selectivity of the treatment can be improved, reducing undesirable side effects. Microbubbles enhance ultrasound energy deposition in the tissues and serve as cavitation nuclei, increasing intracellular drug delivery. DNA delivery and successful tissue transfection are observed in the areas of the body where ultrasound is applied after intravascular administration of microbubbles and plasmid DNA. Accelerated blood clot dissolution in the areas of insonation by cooperative action of thrombolytic agents and microbubbles is demonstrated in several clinical trials.

Natalya Y Rapoport,  Anne Kennedy,  Jill E Shea … (2009)
The paper reports the results of nanotherapy of ovarian, breast, and pancreatic cancerous tumors by paclitaxel-loaded nanoemulsions that convert into microbubbles locally in tumor tissue under the action of tumor-directed therapeutic ultrasound. Tumor accumulation of nanoemulsions was confirmed by ultrasound imaging. Dramatic regression of ovarian, breast, and orthotopic pancreatic tumors was observed in tumor therapy through systemic injections of drug-loaded nanoemulsions combined with therapeutic ultrasound, signifying efficient ultrasound-triggered drug release from tumor-accumulated nanodroplets. The mechanism of drug release in the process of droplet-to-bubble conversion is discussed. No therapeutic effect from the nanodroplet/ultrasound combination was observed without the drug, indicating that therapeutic effect was caused by the ultrasound-enhanced chemotherapeutic action of the tumor-targeted drug, rather than the mechanical or thermal action of ultrasound itself. Tumor recurrence was observed after the completion of the first treatment round; a second treatment round with the same regimen proved less effective, suggesting that drug-resistant cells were either developed or selected during the first treatment round.

* Authors contributed equally to this work.

Publisher ID: thnov02p1185
DOI: 10.7150/thno.4846
PMC ID: 3563153
PubMed ID: 23382775
Copyright statement: © Ivyspring International Publisher. This is an open-access article distributed under the terms of the Creative Commons License (http://creativecommons.org/licenses/by-nc-nd/3.0/). Reproduction is permitted for personal, noncommercial use, provided that the article is in whole, unmodified, and properly cited.