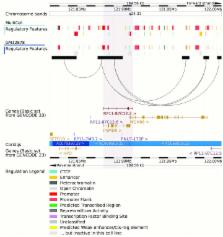 The Ensembl project ( http://www.ensembl.org) is a system for genome annotation, analysis, storage and dissemination designed to facilitate the access of genomic annotation from chordates and key model organisms. It provides access to data from 87 species across our main and early access Pre! websites. This year we introduced three newly annotated species and released numerous updates across our supported species with a concentration on data for the latest genome assemblies of human, mouse, zebrafish and rat. We also provided two data updates for the previous human assembly, GRCh37, through a dedicated website ( http://grch37.ensembl.org). Our tools, in particular the VEP, have been improved significantly through integration of additional third party data. REST is now capable of larger-scale analysis and our regulatory data BioMart can deliver faster results. The website is now capable of displaying long-range interactions such as those found in cis-regulated datasets. Finally we have launched a website optimized for mobile devices providing views of genes, variants and phenotypes. Our data is made available without restriction and all code is available from our GitHub organization site ( http://github.com/Ensembl) under an Apache 2.0 license.

The Sequence Alignment/Map format and SAMtools

Heng Li,  Bob Handsaker,  Alec Wysoker … (2009)
Summary: The Sequence Alignment/Map (SAM) format is a generic alignment format for storing read alignments against reference sequences, supporting short and long reads (up to 128 Mbp) produced by different sequencing platforms. It is flexible in style, compact in size, efficient in random access and is the format in which alignments from the 1000 Genomes Project are released. SAMtools implements various utilities for post-processing alignments in the SAM format, such as indexing, variant caller and alignment viewer, and thus provides universal tools for processing read alignments. Availability: http://samtools.sourceforge.net Contact: rd@sanger.ac.uk

Carlo Sidore,  Yu Wang,  Lachlan Coin (2013)
Summary Through characterising the geographic and functional spectrum of human genetic variation, the 1000 Genomes Project aims to build a resource to help understand the genetic contribution to disease. We describe the genomes of 1,092 individuals from 14 populations, constructed using a combination of low-coverage whole-genome and exome sequencing. By developing methodologies to integrate information across multiple algorithms and diverse data sources we provide a validated haplotype map of 38 million SNPs, 1.4 million indels and over 14 thousand larger deletions. We show that individuals from different populations carry different profiles of rare and common variants and that low-frequency variants show substantial geographic differentiation, which is further increased by the action of purifying selection. We show that evolutionary conservation and coding consequence are key determinants of the strength of purifying selection, that rare-variant load varies substantially across biological pathways and that each individual harbours hundreds of rare non-coding variants at conserved sites, such as transcription-factor-motif disrupting changes. This resource, which captures up to 98% of accessible SNPs at a frequency of 1% in populations of medical genetics focus, enables analysis of common and low-frequency variants in individuals from diverse, including admixed, populations.