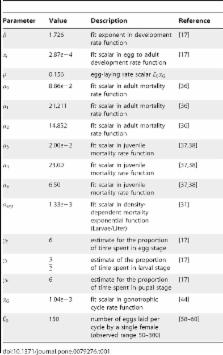 The parasites that cause malaria depend on Anopheles mosquitoes for transmission; because of this, mosquito population dynamics are a key determinant of malaria risk. Development and survival rates of both the Anopheles mosquitoes and the Plasmodium parasites that cause malaria depend on temperature, making this a potential driver of mosquito population dynamics and malaria transmission. We developed a temperature-dependent, stage-structured delayed differential equation model to better understand how climate determines risk. Including the full mosquito life cycle in the model reveals that the mosquito population abundance is more sensitive to temperature than previously thought because it is strongly influenced by the dynamics of the juvenile mosquito stages whose vital rates are also temperature-dependent. Additionally, the model predicts a peak in abundance of mosquitoes old enough to vector malaria at more accurate temperatures than previous models. Our results point to the importance of incorporating detailed vector biology into models for predicting the risk for vector borne diseases.

Erin A. Mordecai,  Krijn Paaijmans,  Leah R. Johnson … (2013)
The ecology of mosquito vectors and malaria parasites affect the incidence, seasonal transmission and geographical range of malaria. Most malaria models to date assume constant or linear responses of mosquito and parasite life-history traits to temperature, predicting optimal transmission at 31 °C. These models are at odds with field observations of transmission dating back nearly a century. We build a model with more realistic ecological assumptions about the thermal physiology of insects. Our model, which includes empirically derived nonlinear thermal responses, predicts optimal malaria transmission at 25 °C (6 °C lower than previous models). Moreover, the model predicts that transmission decreases dramatically at temperatures > 28 °C, altering predictions about how climate change will affect malaria. A large data set on malaria transmission risk in Africa validates both the 25 °C optimum and the decline above 28 °C. Using these more accurate nonlinear thermal-response models will aid in understanding the effects of current and future temperature regimes on disease transmission. © 2012 Blackwell Publishing Ltd/CNRS.

A climate-based distribution model of malaria transmission in sub-Saharan Africa.

This research was supported by United States Department of Agriculture National Research Initiative 2006-35302-17149 to ONB, www.usda.gov, and by National Science Foundation-EID program grant EF-0914384 to MBT and AFR, www.nsf.gov. The funders had no role in study design, data collection and analysis, decision to publish or preparation of the manuscript.