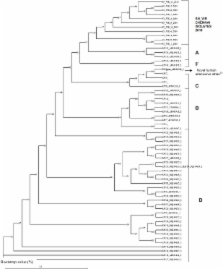 Though several viruses are responsible for conjunctivitis, but human adenovirus (HAdV) is by far the most common cause. Epidemic conjunctivitis causes morbidity and early detection of aetiological agent is essential in preventing spread of disease as some of serotypes of adenoviruses cause a severe form of conjunctivitis. This study was undertaken to identify the causative agent of conjunctivitis outbreak in Chennai in 2010.

Conjunctival samples collected from 17 patients with conjunctivitis were subjected to virological investigations. Culture and PCR for detection of adenovirus and enterovirus were carried out. PCR positive products were further subjected for DNA sequencing. The nucleotide sequences of the hexons of isolates were analyzed by comparison with all 51 human adenovirus strains. Phylogenetic tree was constructed using DAMBE software.

Among 17 patients, seven were positive for adenovirus by PCR on the direct specimen, none was positive for enterovirus. Eleven of 30 conjunctival swabs showed cytopathic effect in HEp-2 cell line and were confirmed as HAdV by PCR. The DNA sequence data of the 11 isolates had equal percentage of homology with HAdV 6 and 2 on blast analysis. On phylogenetic analysis with GeneBank data of 51 adenovirus strains, 11 isolates from patients during the outbreak of conjunctivitis formed a separate clade indicating a new variant strain.

Based on phylogenetic analysis it was concluded that the recent conjunctivitis outbreak that occurred in Chennai was caused by a variant adenovirus strain.

Comparative sequence analysis of the hexon gene in the entire spectrum of human adenovirus serotypes: phylogenetic, taxonomic, and clinical implications.

Richard Pinsker, Daniel K. Ebner, T Lion (2005)
The adenovirus (AdV) hexon constitutes the major virus capsid protein. The epitopes located on the hexon protein are targets of neutralizing antibodies in vivo, serve in the recognition by cytotoxic T cells, and provide the basis for the classification of adenoviruses into the 51 serotypes known to date. We have sequenced the entire hexon gene from human serotypes with incomplete or no sequence information available (n = 34) and performed a comparative analysis of all sequences. The overall sequence divergence between the 51 human serotypes ranged from 0.7 to 25.4% at the protein level. The sequence information has been exploited to assess the phylogeny of the adenovirus family, and protein distances between the six AdV species (A to F) and among individual serotypes within each species were calculated. The analysis revealed that the differences among serotypes within individual species range from 0.3 to 5.4% in the conserved regions (765 amino acids [aa]) and from 1.5 to 59.6% in the variable regions (154 to 221 aa). Serotypes of different species showed an expectedly greater divergence both in the conserved (5.9 to 12.3%) and variable (49.0 to 74.7%) regions. Construction of a phylogenetic tree revealed three major clades comprising the species B+D+E, A+F, and C, respectively. For serotypes 50 and 51, the original assignment to species B and D, respectively, is not in accordance with the hexon DNA and protein sequence data, which placed serotype 50 within species D and serotype 51 within species B. Moreover, the hexon gene of serotype 16, a member of species B, was identified as the product of recombination between sequences of species B and E. In addition to providing a basis for improved molecular diagnostics and classification, the elucidation of the complete hexon gene sequence in all AdV serotypes yields information on putative epitopes for virus recognition, which may have important implications for future treatment strategies permitting efficient targeting of any AdV serotype.

Koki Aoki, Yasushi Shimada, S. Yamazaki … (2008)
In 2000, we encountered cases of nosocomial infections with epidemic keratoconjunctivitis (EKC) at a university hospital in Kobe, in the western part of Japan. Two human adenovirus (HAdV) strains, Kobe-H and Kobe-S, were isolated from patients with nosocomial EKC infection. They were untypeable by existing neutralizing antisera; however, the isolate was neutralized with homologous antisera. We then encountered several cases of EKC due to nosocomial infections in eye clinics in different parts of Japan. A total of 80 HAdVs were isolated from patients with EKC at eight different hospitals. The partial hexon gene sequences of the isolates were determined and compared to those of the prototype strains of 51 serotypes. All isolates had identical partial hexon nucleotide sequences. Phylogenetic analysis classified these isolates into species of HAdV-D. The isolates showed 93.9 to 96.7% nucleotide identity with HAdV-D prototype strains, while all 32 HAdV-D prototype strains ranged from 93.2 to 99.2% identity. The sequences of the loop 2 and fiber knob regions from the representative strain, Kobe-H, were dissimilar in all prototype strains of 51 serotypes. We believe that this virus is a novel serotype of HAdV that causes EKC.

Identification of a new strain of fastidious enterovirus 70 as the causative agent of an outbreak of hemorrhagic conjunctivitis.

Jason S. Rothman, E Mendelson, T Halmut … (1997)
A 1994 outbreak of acute hemorrhagic conjunctivitis in Israel was caused by an enterovirus 70 strain that was distinct from previously reported strains. Characterization was by electron microscopy (eye washes), reverse transcription-PCR (RT-PCR; eyewash, specimens, eye swabs, and tears), and sequence analysis of RT-PCR-amplified fragments from the 5' noncoding region and VP1.