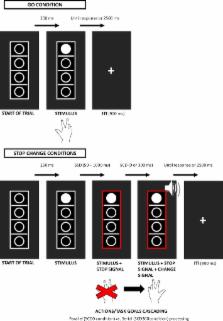 There is a constantly growing interest in developing efficient methods to enhance cognitive functioning and/or to ameliorate cognitive deficits. One particular line of research focuses on the possibly cognitive enhancing effects that action video game (AVG) playing may have on game players. Interestingly, AVGs, especially first person shooter games, require gamers to develop different action control strategies to rapidly react to fast moving visual and auditory stimuli, and to flexibly adapt their behaviour to the ever-changing context. This study investigated whether and to what extent experience with such videogames is associated with enhanced performance on cognitive control tasks that require similar abilities. Experienced action videogame-players (AVGPs) and individuals with little to no videogame experience (NVGPs) performed a stop-change paradigm that provides a relatively well-established diagnostic measure of action cascading and response inhibition. Replicating previous findings, AVGPs showed higher efficiency in response execution, but not improved response inhibition (i.e. inhibitory control), as compared to NVGPs. More importantly, compared to NVGPs, AVGPs showed enhanced action cascading processes when an interruption (stop) and a change towards an alternative response were required simultaneously, as well as when such a change had to occur after the completion of the stop process. Our findings suggest that playing AVGs is associated with enhanced action cascading and multi-component behaviour without affecting inhibitory control.

C Green,  Daphne Bavelier (2003)
As video-game playing has become a ubiquitous activity in today's society, it is worth considering its potential consequences on perceptual and motor skills. It is well known that exposing an organism to an altered visual environment often results in modification of the visual system of the organism. The field of perceptual learning provides many examples of training-induced increases in performance. But perceptual learning, when it occurs, tends to be specific to the trained task; that is, generalization to new tasks is rarely found. Here we show, by contrast, that action-video-game playing is capable of altering a range of visual skills. Four experiments establish changes in different aspects of visual attention in habitual video-game players as compared with non-video-game players. In a fifth experiment, non-players trained on an action video game show marked improvement from their pre-training abilities, thereby establishing the role of playing in this effect.

This work was supported by a research grant from the Netherlands Organization for Scientific Research (NWO; www.nwo.nl) awarded to LSC (Vidi grant: #452-12-001) and from the Deutsche Forschungsgemeinschaft (DFG; www.dfg.de) awarded to CB (#BE4045/10-1 and 10-2). The NWO and DFG had no further role in study design; in the collection, analysis and interpretation of data; in the writing of the report; and in the decision to submit the paper for publication.