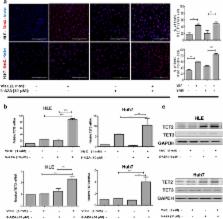 5-Azacytidine (5-AZA), a DNA methyl transferase inhibitor, is a clinically used epigenetic drug for cancer therapy. Recently, we have shown that 5-AZA upregulates ten-eleven translocation (TET) protein expression in hepatocellular carcinoma (HCC) cells, which induce active demethylation. Vitamin C facilitates TET activity and enhances active demethylation. The aim of this study is to investigate whether vitamin C is able to enhance the effect of 5-AZA on active demethylation and to evaluate its consequence in HCC cell lines.

Our results indicated that vitamin C enhances the anti-proliferative and apoptotic effect of 5-AZA in HCC cell lines. By further analyzing the events leading to cell cycle arrest, we have shown for the first time in HCC that the combination of 5-AZA and vitamin C leads to an enhanced downregulation of Snail expression, a key transcription factor governing epithelial-mesenchymal transition (EMT) process, and cell cycle arrest.

We conclude that when combined with 5-AZA, vitamin C enhances TET activity in HCC cells, leading to induction of active demethylation. An increase in P21 expression as a consequence of downregulation of Snail accompanied by the induction of GADD45B expression is the main mechanism leading to cell cycle arrest in HCCs.

5-Azacytidine and 5-aza-2'-deoxycytidine as inhibitors of DNA methylation: mechanistic studies and their implications for cancer therapy.

J K Christman (2002)
5-Azacytidine was first synthesized almost 40 years ago. It was demonstrated to have a wide range of anti-metabolic activities when tested against cultured cancer cells and to be an effective chemotherapeutic agent for acute myelogenous leukemia. However, because of 5-azacytidine's general toxicity, other nucleoside analogs were favored as therapeutics. The finding that 5-azacytidine was incorporated into DNA and that, when present in DNA, it inhibited DNA methylation, led to widespread use of 5-azacytidine and 5-aza-2'-deoxycytidine (Decitabine) to demonstrate the correlation between loss of methylation in specific gene regions and activation of the associated genes. There is now a revived interest in the use of Decitabine as a therapeutic agent for cancers in which epigenetic silencing of critical regulatory genes has occurred. Here, the current status of our understanding of the mechanism(s) by which 5-azacytosine residues in DNA inhibit DNA methylation is reviewed with an emphasis on the interactions of these residues with bacterial and mammalian DNA (cytosine-C5) methyltransferases. The implications of these mechanistic studies for development of less toxic inhibitors of DNA methylation are discussed.

Qiang Chang,  Aparna Vasanthakumar,  Peng-Peng Jin … (2011)
DNA methylation dynamics influence brain function and are altered in neurological disorders. 5-hydroxymethylcytosine (5-hmC), a DNA base that is derived from 5-methylcytosine, accounts for ∼40% of modified cytosine in the brain and has been implicated in DNA methylation-related plasticity. We mapped 5-hmC genome-wide in mouse hippocampus and cerebellum at three different ages, which allowed us to assess its stability and dynamic regulation during postnatal neurodevelopment through adulthood. We found developmentally programmed acquisition of 5-hmC in neuronal cells. Epigenomic localization of 5-hmC-regulated regions revealed stable and dynamically modified loci during neurodevelopment and aging. By profiling 5-hmC in human cerebellum, we found conserved genomic features of 5-hmC. Finally, we found that 5-hmC levels were inversely correlated with methyl-CpG-binding protein 2 dosage, a protein encoded by a gene in which mutations cause Rett syndrome. These data suggest that 5-hmC-mediated epigenetic modification is critical in neurodevelopment and diseases.

Gui Yang,  Qing Mao,  Shengquan Liu … (2013)
DNA hydroxymethylation and its mediated DNA demethylation are critical for multiple cellular processes, for example, nuclear reprogramming, embryonic development, and many diseases. Here, we demonstrate that a vital nutrient ascorbic acid (AA), or vitamin C (Vc), can directly enhance the catalytic activity of Tet dioxygenases for the oxidation of 5-methylcytosine (5mC). As evidenced by changes in intrinsic fluorescence and catalytic activity of Tet2 protein caused by AA and its oxidation-resistant derivatives, we further show that AA can uniquely interact with the C-terminal catalytic domain of Tet enzymes, which probably promotes their folding and/or recycling of the cofactor Fe(2+). Other strong reducing chemicals do not have a similar effect. These results suggest that AA also acts as a cofactor of Tet enzymes. In mouse embryonic stem cells, AA significantly increases the levels of all 5mC oxidation products, particularly 5-formylcytosine and 5-carboxylcytosine (by more than an order of magnitude), leading to a global loss of 5mC (∼40%). In cells deleted of the Tet1 and Tet2 genes, AA alters neither 5mC oxidation nor the overall level of 5mC. The AA effects are however restored when Tet2 is re-expressed in the Tet-deficient cells. The enhancing effects of AA on 5mC oxidation and DNA demethylation are also observed in a mouse model deficient in AA synthesis. Our data establish a direct link among AA, Tet, and DNA methylation, thus revealing a role of AA in the regulation of DNA modifications.