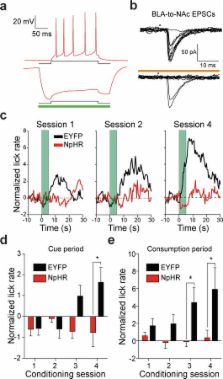 The basolateral amygdala (BLA) plays a crucial role in emotional learning irrespective of valence 1– 5 . While the BLA projection to the nucleus accumbens (NAc) is hypothesized to modulate cue-triggered motivated behaviors 4, 6, 7, , our understanding of the interaction between these two brain regions has been limited by the inability to manipulate neural circuit elements of this pathway selectively during behavior. To circumvent this limitation, we used in vivo optogenetic stimulation or inhibition of glutamatergic fibers from the BLA to the NAc, coupled with intracranial pharmacology and ex vivo electrophysiology. We show that optical stimulation of the BLA-to-NAc pathway in mice reinforces behavioral responding to earn additional optical stimulations of these synaptic inputs. Optical stimulation of BLA-to-NAc glutamatergic fibers required intra-NAc dopamine D1-type, but not D2-type, receptor signaling. Brief optical inhibition of BLA-to-NAc fibers reduced cue-evoked intake of sucrose, demonstrating an important role of this specific pathway in controlling naturally occurring reward-related behavior. Moreover, while optical stimulation of medial prefrontal cortex (mPFC) to NAc glutamatergic fibers also elicited reliable excitatory synaptic responses, optical self-stimulation behavior was not observed by activation of this pathway. These data suggest that while the BLA is important for processing both positive and negative affect, the BLA-to-NAc glutamatergic pathway in conjunction with dopamine signaling in the NAc promotes motivated behavioral responding.

Phasic firing in dopaminergic neurons is sufficient for behavioral conditioning.

Edward Boyden,  Ping Wang,  Feng Zhang … (2006)
Electrically excitable cells are important in the normal functioning and in the pathophysiology of many biological processes. These cells are typically embedded in dense, heterogeneous tissues, rendering them difficult to target selectively with conventional electrical stimulation methods. The algal protein Channelrhodopsin-2 offers a new and promising solution by permitting minimally invasive, genetically targeted and temporally precise photostimulation. Here we explore technological issues relevant to the temporal precision, spatial targeting and physiological implementation of ChR2, in the context of other photostimulation approaches to optical control of excitable cells.

M Wightman,  Michael Heien,  C R Carelli … (2003)
The dopamine-containing projection from the ventral tegmental area of the midbrain to the nucleus accumbens is critically involved in mediating the reinforcing properties of cocaine. Although neurons in this area respond to rewards on a subsecond timescale, neurochemical studies have only addressed the role of dopamine in drug addiction by examining changes in the tonic (minute-to-minute) levels of extracellular dopamine. To investigate the role of phasic (subsecond) dopamine signalling, we measured dopamine every 100 ms in the nucleus accumbens using electrochemical technology. Rapid changes in extracellular dopamine concentration were observed at key aspects of drug-taking behaviour in rats. Before lever presses for cocaine, there was an increase in dopamine that coincided with the initiation of drug-seeking behaviours. Notably, these behaviours could be reproduced by electrically evoking dopamine release on this timescale. After lever presses, there were further increases in dopamine concentration at the concurrent presentation of cocaine-related cues. These cues alone also elicited similar, rapid dopamine signalling, but only in animals where they had previously been paired to cocaine delivery. These findings reveal an unprecedented role for dopamine in the regulation of drug taking in real time.