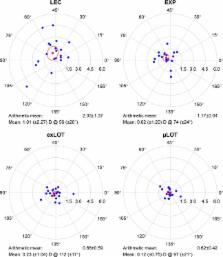 Eighty right eyes of 80 subjects who underwent LEC (n=20), EXP (n=20), exLOT (n=20), or μLOT (n=20) were included. The dataset including the best-corrected visual acuity (BCVA), intraocular pressure (IOP), and keratometry recordings preoperatively and 3 months postoperatively was collected by chart review. The means of the vector magnitude, vector meridian, and arithmetic magnitude of the preoperative and postoperative astigmatism and SIA were calculated. The correlations among the SIA magnitude, postoperative BCVA, and IOP were assessed.

Clinical results with the Trabectome for treatment of open-angle glaucoma.

D S Minckler,  G Baerveldt,  B. Francis … (2005)
To describe clinical results from a pilot study of a novel glaucoma surgical device. Prospective interventional case series. Thirty-seven adult Hispanic and Caucasian patients (17 male, 20 female) with uncontrolled open-angle glaucoma (OAG) in one or both eyes with or without previous surgery or laser treatment were recruited from a clinical practice in Tijuana, Mexico. Surgery was performed with the Trabectome (NeoMedix Corp., San Juan Capistrano, CA) in one eye of each patient. Goldmann applanation intraocular pressures and Snellen visual acuities were measured before and after surgery. Intraoperative and postoperative adverse events were tabulated, and numbers of preoperative and postoperative adjunctive medications were compared before and after surgery. Preoperative pressures after 1 week of medication washout averaged 28.2+/-4.4 mmHg (n = 37). Only 3 patients were not using topical medications preoperatively. Follow-up ranged between 3 months (n = 37) and 13 months (n = 11). Mean postoperative IOPs were 18.4+/-10.9 mmHg (n = 37) at 1 day, 17.5+/-5.9 mmHg (n = 37) at 1 week, 17.4+/-3.5 mmHg (n = 25) at 6 months, and 16.3+/-2.0 mmHg (n = 15) at 12 months. Visions returned to within 2 lines of preoperative levels and remained stable in all patients beyond 3 weeks postoperatively except one, not sutured at surgery, who had a late hyphema probably associated with corneal wound gaping after accidental blunt trauma. The number of adjunctive medications decreased from 1.2+/-0.6 among preoperative patients on medications (n = 34) to 0.4+/-0.6 among all patients at 6 months (n = 25). Blood reflux occurred in all eyes on instrument withdrawal after angle surgery and was present at day 1 in 22 eyes (59%) with clearing by slit-lamp examination at a mean of 6.4+/-4.1 days postoperatively. The Trabectome seems to offer a safe and effective method of lowering IOP in OAG.

A new method of analyzing vectors for changes in astigmatism.

N Alpins (1993)
This method of astigmatism analysis recognizes the need to define an astigmatism goal, thus allowing the surgeon to obtain precise, separate measures of the magnitude and the angle of surgical error. From this, the surgeon can evaluate what surgery may be required to achieve the initial preoperative goal. An index that measures surgical success is adjusted for the level of preoperative astigmatism. The resulting data allow statistical comparison of multiple surgeries and techniques. This method also assists in resolving the case when spectacle and corneal astigmatism do not coincide.