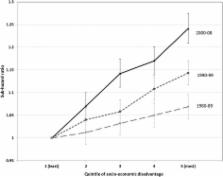 Public concerns are commonly expressed about widening health gaps. This cohort study examines variations and trends in cancer survival by socio-economic disadvantage, geographical remoteness and country of birth in an Australian population over a 30-year period.

There is a widening gap in comparative risk of cancer death by level of socio-economic disadvantage that warrants a policy response and further examination of reasons behind these disparities.

Marcio C. Silva-Filho,  J Vaughan,  Carolina F. D. C. Barros … (2000)
There is considerable international concern that child-health inequities seem to be getting worse between and within richer and poorer countries. The "inverse equity hypothesis" is proposed to explain how such health inequities may get worse, remain the same, or improve over time. We postulate that as new public-health interventions and programmes initially reach those of higher socioeconomic status and only later affect the poor, there are early increases in inequity ratios for coverage, morbidity, and mortality indicators. Inequities only improve later when the rich have achieved new minimum achievable levels for morbidity and mortality and the poor gain greater access to the interventions. The hypothesis was examined using three epidemiological data sets for time trends in child-health inequities within Brazil. Time trends for inequity ratios for morbidity and mortality, which were consistent with the hypothesis, showed both improvements and deterioration over time, despite the indicators showing absolute improvements in health status between rich and poor.

Origins of socio-economic inequalities in cancer survival: a review.