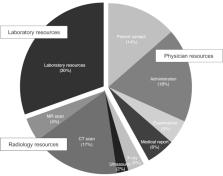 A major cause for concern about increasing ED visits is that ED care is expensive. Recent research suggests that ED resource consumption is affected by patients’ health status, varies between physicians and is context dependent. The aim of this study is to determine the relative proportion of characteristics of the patient, the physician and the context that contribute to ED resource consumption.

Data on patients, physicians and the context were obtained in a prospective observational cohort study of patients hospitalised to an internal medicine ward through the ED of the University Hospital Bern, Switzerland, between August and December 2015. Diagnostic resource consumption in the ED was modelled through a multilevel mixed effects linear regression.

Diagnostic resource consumption in the ED is heavily affected by physicians’ situational confidence. Whether we should aim at altering physician confidence ultimately depends on its calibration with accuracy.

Our stubborn quest for diagnostic certainty. A cause of excessive testing.

Lesley Latham,  Stacy Ackroyd-Stolarz (2014)
Background Emergency Departments (EDs) are playing an increasingly important role in the care of older adults. Characterizing ED usage will facilitate the planning for care delivery more suited to the complex health needs of this population. Methods In this retrospective cross-sectional study, administrative and clinical data were extracted from four study sites. Visits for patients aged 65 years or older were characterized using standard descriptive statistics. Results We analyzed 34,454 ED visits by older adults, accounting for 21.8% of the total ED visits for our study time period. Overall, 74.2% of patient visits were triaged as urgent or emergent. Almost half (49.8%) of visits involved diagnostic imaging, 62.1% involved lab work, and 30.8% involved consultation with hospital services. The most common ED diagnoses were symptom- or injury-related (25.0%, 17.1%. respectively). Length of stay increased with age group (Mann-Whitney U; p < .0001), as did the proportion of visits involving diagnostic testing and consultation (χ2; p < .0001). Approximately 20% of older adults in our study population were admitted to hospital following their ED visit. Conclusions Older adults have distinct patterns of ED use. ED resource use intensity increases with age. These patterns may be used to target future interventions involving alternative care for older adults.