White spot syndrome virus: an overview on an emergent concern 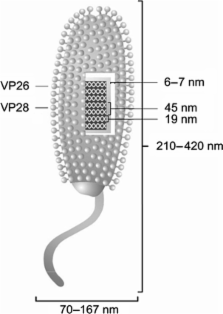 Viruses are ubiquitous and extremely abundant in the marine environment. One of such marine viruses, the white spot syndrome virus (WSSV), has emerged globally as one of the most prevalent, widespread and lethal for shrimp populations. However, at present there is no treatment available to interfere with the unrestrained occurrence and spread of the disease. The recent progress in molecular biology techniques has made it possible to obtain information on the factors, mechanisms and strategies used by this virus to infect and replicate in susceptible host cells. Yet, further research is still required to fully understand the basic nature of WSSV, its exact life cycle and mode of infection. This information will expand our knowledge and may contribute to developing effective prophylactic or therapeutic measures. This review provides a state-of-the-art overview of the topic, and emphasizes the current progress and future direction for the development of WSSV control strategies.

The complete gene sequence of titin, expression of an unusual approximately 700-kDa titin isoform, and its interaction with obscurin identify a novel Z-line to I-band linking system.

M McNabb,  F Fornoff,  Juliana Gregorio … (2001)
Titin is a giant vertebrate striated muscle protein with critical importance for myofibril elasticity and structural integrity. We show here that the complete sequence of the human titin gene contains 363 exons, which together code for 38 138 residues (4200 kDa). In its central I-band region, 47 novel PEVK exons were found, which contribute to titin's extensible spring properties. Additionally, 3 unique I-band titin exons were identified (named novex-1 to -3). Novex-3 functions as an alternative titin C-terminus. The novex-3 titin isoform is approximately 700 kDa in size and spans from Z1-Z2 (titin's N-terminus) to novex-3 (C-terminal exon). Novex-3 titin specifically interacts with obscurin, a 721-kDa myofibrillar protein composed of 57 Ig/FN3 domains, followed by one IQ, SH3, DH, and a PH domain at its C-terminus. The obscurin domains Ig48/Ig49 bind to novex-3 titin and target to the Z-line region when expressed as a GFP fusion protein in live cardiac myocytes. Immunoelectron microscopy detected the C-terminal Ig48/Ig49 obscurin epitope near the Z-line edge. The distance from the Z-line varied with sarcomere length, suggesting that the novex-3 titin/obscurin complex forms an elastic Z-disc to I-band linking system. This system could link together calcium-dependent, SH3-, and GTPase-regulated signaling pathways in close proximity to the Z-disc, a structure increasingly implicated in the restructuring of sarcomeres during cardiomyopathies.

R Lankhorst,  Nicholas S. Peters,  H Sandbrink … (2001)
White spot syndrome virus (WSSV) is at present a major scourge to worldwide shrimp cultivation. We have determined the entire sequence of the double-stranded, circular DNA genome of WSSV, which contains 292,967 nucleotides encompassing 184 major open reading frames (ORFs). Only 6% of the WSSV ORFs have putative homologues in databases, mainly representing genes encoding enzymes for nucleotide metabolism, DNA replication, and protein modification. The remaining ORFs are mostly unassigned, except for five, which encode structural virion proteins. Unique features of WSSV are the presence of a very long ORF of 18,234 nucleotides, with unknown function, a collagen-like ORF, and nine regions, dispersed along the genome, each containing a variable number of 250-bp tandem repeats. The collective information on WSSV and the phylogenetic analysis on the viral DNA polymerase suggest that WSSV differs profoundly from all presently known viruses and that it is a representative of a new virus family. Copyright 2001 Academic Press.

This is an Open Access article distributed under the terms of the Creative Commons Attribution-Noncommercial License ( http://creativecommons.org/licenses/by-nc/3.0/), which permits unrestricted use, distribution, and reproduction in any noncommercial medium, provided the original work is properly cited.