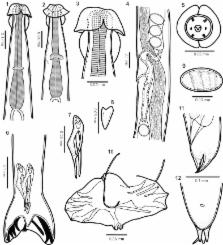 A new species of nematode, Torrestrongylus tetradorsalis n. sp., is described herein, based on specimens recovered from the small intestine of the leaf-nosed bat, Macrotus waterhousii, from the Biosphere Reserve “Sierra de Huautla” in the state of Morelos, Mexico. The new species is included in Torrestrongylus because it features a bursa of the type 3 – 2, a divided cephalic vesicle with an anterior half in the shape of an umbrella, and a posterior widened half. The new species can be distinguished from the only other congener T. torrei Pérez-Vigueras, 1935 by four key features: first, by the absence of cervical alae in both males and females; second, by the relatively longer second half of the cephalic cap; third, by the configuration of the dorsal ray, that does not have a medial terminal ray, and finally, by the structure of the spicules. This is the second species in the genus, previously known from bats of the families Phyllostomidae and Molossidae in Cuba, and now in Mexico.

Trichostrongyloid nematodes and their vertebrate hosts: reconstruction of the phylogeny of a parasitic group.

R Scheibel,  François Catzeflis,  F. Agustín Jiménez (2014)
The trichostrongylid nematode Travassostrongylus scheibelorum sp. n. from the Linnaeus' mouse opossum, Marmosa murina (Linnaeus) (type host), and the woolly mouse opossum, Marmosa demerarae (Thomas), from French Guiana is described. The nematodes have a synlophe with ridges frontally oriented from right to left, six dorsal and six ventral, at midbody; seven dorsal and seven ventral posterior to the vulva, and two cuticular thickenings within the lateral spaces; a long dorsal ray and a pointed cuticular flap covering the vulva. This is the 12th species of Travassostrongylus Orloff, 1933, which includes species featuring ridges around the synlophe and a didelphic condition. These traits contrast with those in other genera in the Viannaiidae Neveu-Lemaire, 1934, which feature ventral ridges on the synlophe of adults and a monodelphic condition. Members of the family are chiefly Neotropical and are diagnosed based on the presence of a bursa of the type 2-2-1, 2-1-2 or irregular, and cuticle without ridges on the dorsal side (at least during one stage of their development). Herein, we present a reconstruction of the ancestral states of the didelphic/monodelphic condition and the cuticular ridges that form the synlophe in opossum-dwelling trichostrongyles, namely Travassostrongylus and Viannaia Travassos, 1914. Our investigations suggest they are not reciprocal sister taxa and that the change from didelphy to monodelphy and the loss of dorsal ridges, occurred in the common ancestor of species of Viannaia. These results suggest a synlophe with three ventral ridges is not plesiomorphic in the opossum dwelling trichostrongylids.