Influence of Gender on Cardiac and Encephalic Inflammation in the Elderly with Cysticercosis: A Case Control Study 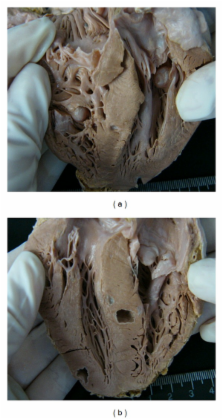 M Loreto,  L Ginaldi,  Massimiliano Corsi Romanelli … (2001)
Infectious diseases are major causes, with malignancies, of morbidity and mortality in the elderly. Increased susceptibility to infections may result from underlying dysfunction of an aged immune system; moreover, inappropriate immunologic functions associated with aging can determine an insufficient response to vaccines. Impairments of cellular, humoral and innate immunity in the elderly, contributing to increased incidence of infectious diseases, are discussed in this review.

Amiela Globerson,  Ros Forsey,  Daniela Frasca … (2002)
Age-related changes in the immune system may contribute to morbidity and mortality due to decreased resistance to infection and, possibly, certain cancers in the aged. Many studies mostly performed in mice, rats and man but also including monkeys and dogs have established that age-associated immune decline is characterized by decreases in both humoral and cellular responses. The former may be largely a result of the latter, because observed changes both in the B cell germline-encoded repertoire and the age-associated decrease in somatic hypermutation of the B cell antigen receptors are now known to be critically affected by helper T cell aging. As antigen presenting cell (APC) function appears to be well-maintained in the elderly, this review will focus on the T cell. Factors contributing to T cell immunosenescence may include a) altered production of T cell progenitors (stem cell defects, stromal cell defects), b) decreased levels of newly-generated mature T cells (thymic involution), c) aging of resting immune cells, d) disrupted activation pathways in immune cells (stimulation via the T cell receptor for antigen, costimulation, apoptosis control), e) replicative senescence of clonally expanding cells. This review aims to consider the current state of knowledge on the scientific basis for and potential clinical relevance of those factors in immunosenescence in humans. Experiments in other species will be touched upon with the proviso that there are clearly differences between them, especially between humans and rodents, but exactly what those differences are is not completely clear. Given its potential importance and the increasing proportion of elderly people the world over, coupled with the realisation that whereas mortality is decreasing, morbidity may not be decreasing in parallel (1), a better understanding of the causes and impact of immunosenescence may offer the possibility of identifying where prevention or delay of onset, as well as therapeutic intervention, might be beneficial. Amelioration of the effects of dysregulated immune responses in the elderly by replacement therapy, supplementation therapy or other approaches may result in an enhancement of their quality of life, and significant reductions in the cost of medical care in old age.

M Tapia,  Pierre-Marie Preux,  Alain Dessein … (2004)
To evaluate the relevance of exposure and host biological factors in the heterogeneity of the clinical, radiological and inflammatory picture of neurocysticercosis (NCC). 105 Mexican symptomatic NCC patients confirmed by imaging were studied before they received any specific treatment. The relationships studied were those between a) the patients' characteristics (gender, age and level of exposure), b) the type of clinical picture and c) the radiological and inflammatory characteristics of the disease (number, aspect, localization of the parasites, and CSF leukocyte counts). Seizures were the most frequent symptom and multiple subarachnoid cysticerci the most frequent localization. Symptomatology related to the developmental stage, number and localization of the parasites as well as the CSF leukocyte-counts. The total number of cysticercal lesions and of vesicular cysticerci increased with age,whereas the number of colloidal cysticerci decreased. CSF leukocyte-counts were higher in women than in men. Levels of exposure did not correlate with the clinical and radiological pictures. The variability found in the number, stage, localization and inflammation in the parasite lesions is strongly associated with the heterogeneity of NCC symptoms. The increased number of vesicular cysticerci and the decreased number of degenerating cysticerci with aging, as well as the prominence of inflammation in women suggest that immuno-endocrinological factors may play a role in susceptibility and pathogenesis. The data also show that with increasing age and exposure there is no increment in severity, a suggestion that there might be ways of regulating pathogenicity.