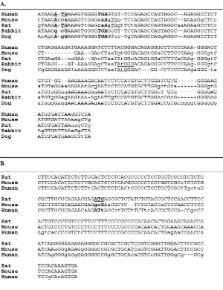 We report that transcriptional expression of the human SHBG gene is far more complex than previously described. P L and P T direct the expression of at least six independent transcripts each, resulting from alternative splicing of exons 4, 5, 6, and/or 7. We mapped two transcriptional start sites downstream of P L and P T, and present evidence for a third SHBG gene promoter (P N) within the neighboring FXR2 gene; P N regulates the expression of at least seven independent SHBG gene transcripts, each possessing a novel, 164-nt first exon (1N). Transcriptional expression patterns were generated for human prostate, breast, testis, liver, and brain, and the LNCaP, MCF-7, and HepG2 cell lines. Each expresses the SHBG transcript, albeit in varying abundance. Alternative splicing was more pronounced in the cancer cell lines. P L- P T- and P N-derived transcripts were most abundant in liver, testis, and prostate, respectively. Initial findings reveal the existence of a smaller immunoreactive SHBG species in LNCaP, MCF-7, and HepG2 cells.

These results extend our understanding of human SHBG gene transcription, and raise new and important questions regarding the role of novel alternatively spliced transcripts, their function in hormonally responsive tissues including the breast and prostate, and the role that aberrant SHBG gene expression may play in cancer.

Repression of the human dihydrofolate reductase gene by a non-coding interfering transcript.

Aroul Ramadass,  Danielle Chow,  Ana Barros … (2007)
Alternative promoters within the same gene are a general phenomenon in gene expression. Mechanisms of their selective regulation vary from one gene to another and are still poorly understood. Here we show that in quiescent cells the mechanism of transcriptional repression of the major promoter of the gene encoding dihydrofolate reductase depends on a non-coding transcript initiated from the upstream minor promoter and involves both the direct interaction of the RNA and promoter-specific interference. The specificity and efficiency of repression is ensured by the formation of a stable complex between non-coding RNA and the major promoter, direct interaction of the non-coding RNA with the general transcription factor IIB and dissociation of the preinitiation complex from the major promoter. By using in vivo and in vitro assays such as inducible and reconstituted transcription, RNA bandshifts, RNA interference, chromatin immunoprecipitation and RNA immunoprecipitation, we show that the regulatory transcript produced from the minor promoter has a critical function in an epigenetic mechanism of promoter-specific transcriptional repression.

An abundance of bidirectional promoters in the human genome.

Shelley Force Aldred,  Phil Hartman,  Nathan Trinklein … (2003)
The alignment of full-length human cDNA sequences to the finished sequence of the human genome provides a unique opportunity to study the distribution of genes throughout the genome. By analyzing the distances between 23,752 genes, we identified a class of divergently transcribed gene pairs, representing more than 10% of the genes in the genome, whose transcription start sites are separated by less than 1000 base pairs. Although this bidirectional arrangement has been previously described in humans and other species, the prevalence of bidirectional gene pairs in the human genome is striking, and the mechanisms of regulation of all but a few bidirectional genes are unknown. Our work shows that the transcripts of many bidirectional pairs are coexpressed, but some are antiregulated. Further, we show that many of the promoter segments between two bidirectional genes initiate transcription in both directions and contain shared elements that regulate both genes. We also show that the bidirectional arrangement is often conserved among mouse orthologs. These findings demonstrate that a bidirectional arrangement provides a unique mechanism of regulation for a significant number of mammalian genes.

Role of endocytosis in cellular uptake of sex steroids.

Jens Raila,  T Andreassen,  A Hammes … (2005)
Androgens and estrogens are transported bound to the sex hormone binding globulin (SHBG). SHBG is believed to keep sex steroids inactive and to control the amount of free hormones that enter cells by passive diffusion. Contrary to the free hormone hypothesis, we demonstrate that megalin, an endocytic receptor in reproductive tissues, acts as a pathway for cellular uptake of biologically active androgens and estrogens bound to SHBG. In line with this function, lack of receptor expression in megalin knockout mice results in impaired descent of the testes into the scrotum in males and blockade of vagina opening in females. Both processes are critically dependent on sex-steroid signaling, and similar defects are seen in animals treated with androgen- or estrogen-receptor antagonists. Thus, our findings uncover the existence of endocytic pathways for protein bound androgens and estrogens and their crucial role in development of the reproductive organs.