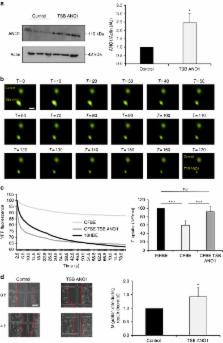 Downregulation of the anoctamin 1 calcium channel in airway epithelial cells contributes to pathology in cystic fibrosis. Here the authors show that microRNA-9 targets anoctamin 1 and that inhibiting this interaction improves mucus dynamics in mouse models.

Nicole A H Janssen,  Guus Dongen,  Robert Persson … (2013)
The stability and propagation of hepatitis C virus (HCV) is dependent on a functional interaction between the HCV genome and liver-expressed microRNA-122 (miR-122). Miravirsen is a locked nucleic acid-modified DNA phosphorothioate antisense oligonucleotide that sequesters mature miR-122 in a highly stable heteroduplex, thereby inhibiting its function. In this phase 2a study at seven international sites, we evaluated the safety and efficacy of miravirsen in 36 patients with chronic HCV genotype 1 infection. The patients were randomly assigned to receive five weekly subcutaneous injections of miravirsen at doses of 3 mg, 5 mg, or 7 mg per kilogram of body weight or placebo over a 29-day period. They were followed until 18 weeks after randomization. Miravirsen resulted in a dose-dependent reduction in HCV RNA levels that endured beyond the end of active therapy. In the miravirsen groups, the mean maximum reduction in HCV RNA level (log10 IU per milliliter) from baseline was 1.2 (P=0.01) for patients receiving 3 mg per kilogram, 2.9 (P=0.003) for those receiving 5 mg per kilogram, and 3.0 (P=0.002) for those receiving 7 mg per kilogram, as compared with a reduction of 0.4 in the placebo group. During 14 weeks of follow-up after treatment, HCV RNA was not detected in one patient in the 5-mg group and in four patients in the 7-mg group. We observed no dose-limiting adverse events and no escape mutations in the miR-122 binding sites of the HCV genome. The use of miravirsen in patients with chronic HCV genotype 1 infection showed prolonged dose-dependent reductions in HCV RNA levels without evidence of viral resistance. (Funded by Santaris Pharma; ClinicalTrials.gov number, NCT01200420.).

Identification of the cystic fibrosis gene: cloning and characterization of complementary DNA