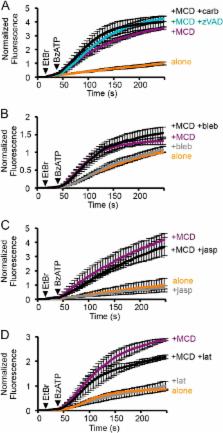 Background: P2X7 receptors are important in inflammation and immunity, but excessive activation results in cell death.

Significance: Targeting of P2X7 to cholesterol-rich lipid rafts may protect cells from death.

P2X7 receptors are nonselective cation channels gated by high extracellular ATP, but with sustained activation, receptor sensitization occurs, whereby the intrinsic pore dilates, making the cell permeable to large organic cations, which eventually leads to cell death. P2X7 receptors associate with cholesterol-rich lipid rafts, but it is unclear how this affects the properties of the receptor channel. Here we show that pore-forming properties of human and rodent P2X7 receptors are sensitive to perturbations of cholesterol levels. Acute depletion of cholesterol with 5 m m methyl-β-cyclodextrin (MCD) caused a substantial increase in the rate of agonist-evoked pore formation, as measured by the uptake of ethidium dye, whereas cholesterol loading inhibited this process. Patch clamp analysis of P2X7 receptor currents carried by Na + and N-methyl- d-glucamine (NMDG +) showed enhanced activation and current facilitation following cholesterol depletion. This contrasts with the inhibitory effect of methyl-β-cyclodextrin reported for other P2X subtypes. Mutational analysis suggests the involvement of an N-terminal region and a proximal C-terminal region that comprises multiple cholesterol recognition amino acid consensus (CRAC) motifs, in the cholesterol sensitivity of channel gating. These results reveal cholesterol as a negative regulator of P2X7 receptor pore formation, protecting cells from P2X7-mediated cell death.

Raphael Zidovetzki,  Irena Levitan (2007)
The physiological importance of cholesterol in the cell plasma membrane has attracted increased attention in recent years. Consequently, the use of methods of controlled manipulation of membrane cholesterol content has also increased sharply, especially as a method of studying putative cholesterol-enriched cell membrane domains (rafts). The most common means of modifying the cholesterol content of cell membranes is the incubation of cells or model membranes with cyclodextrins, a family of compounds, which, due to the presence of relatively hydrophobic cavity, can be used to extract cholesterol from cell membranes. However, the mechanism of this activity of cyclodextrins is not completely established. Moreover, under conditions commonly used for cholesterol extraction, cyclodextrins may remove cholesterol from both raft and non-raft domains of the membrane as well as alter the distribution of cholesterol between plasma and intracellular membranes. In addition, other hydrophobic molecules such as phospholipids may also be extracted from the membranes by cyclodextrins. We review the evidence for the specific and non-specific effects of cyclodextrins and what is known about the mechanisms for cyclodextrin-induced cholesterol and phospholipid extraction. Finally, we discuss useful control strategies that may help to verify that the observed effects are due specifically to cyclodextrin-induced changes in cellular cholesterol.

Eric Gouaux,  Motoyuki Hattori (2012)
P2X receptors are trimeric ATP-activated ion channels permeable to Na+, K+ and Ca2+. The seven P2X receptor subtypes are implicated in physiological processes that include modulation of synaptic transmission, contraction of smooth muscle, secretion of chemical transmitters and regulation of immune responses. Despite the importance of P2X receptors in cellular physiology, the three-dimensional composition of the ATP-binding site, the structural mechanism of ATP-dependent ion channel gating and the architecture of the open ion channel pore are unknown. Here we report the crystal structure of the zebrafish P2X4 receptor in complex with ATP and a new structure of the apo receptor. The agonist-bound structure reveals a previously unseen ATP-binding motif and an open ion channel pore. ATP binding induces cleft closure of the nucleotide-binding pocket, flexing of the lower body β-sheet and a radial expansion of the extracellular vestibule. The structural widening of the extracellular vestibule is directly coupled to the opening of the ion channel pore by way of an iris-like expansion of the transmembrane helices. The structural delineation of the ATP-binding site and the ion channel pore, together with the conformational changes associated with ion channel gating, will stimulate development of new pharmacological agents.

Innate immunosenescence: effect of aging on cells and receptors of the innate immune system in humans.

Rafael Solana,  Raquel Tarazona,  Inmaculada Gayoso … (2012)
Components of the innate immune response, including neutrophils and macrophages, are the first line of defense against infections. Their role is to initiate an inflammatory response, phagocyte and kill pathogens, recruit natural killer cells (NK), and facilitate the maturation and migration of dendritic cells that will initiate the adaptive immune response. Extraordinary advances have been made in the last decade on the knowledge of the receptors and mechanisms used by cells of the innate immunity not only to sense and eliminate the pathogen but also to communicate each other and collaborate with cells of adaptive immunity to mount an effective immune response. The analysis of innate immunity in elderly humans has evidenced that aging has a profound impact on the phenotype and functions of these cells. Thus altered expression and/or function of innate immunity receptors and signal transduction leading to defective activation and decreased chemotaxis, phagocytosis and intracellular killing of pathogens have been described. The phenotype and function of NK cells from elderly individuals show significant changes that are compatible with remodeling of the different NK subsets, with a decrease in the CD56bright subpopulation and accumulation of the CD56dim cells, in particular those differentiated NK cells that co-express CD57, as well as a decreased expression of activating natural cytotoxicity receptors. These alterations can be responsible of the decreased production of cytokines and the lower per-cell cytotoxicity observed in the elderly. Considering the relevance of these cells in the initiation of the immune response, the possibility to reactivate the function of innate immune cells should be considered in order to improve the response to pathogens and to vaccination in the elderly. Copyright © 2012 Elsevier Ltd. All rights reserved.

Funded by the David James Studentship, Department of Pharmacology, University of Cambridge.

Funded by a Marshall Scholarship.