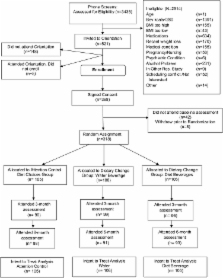 Objective: We compared the replacement of caloric beverages with water or diet beverages (DBs) as a method of weight loss over 6 mo in adults and attention controls (ACs).

Conclusions: Replacement of caloric beverages with noncaloric beverages as a weight-loss strategy resulted in average weight losses of 2% to 2.5%. This strategy could have public health significance and is a simple, straightforward message. This trial was registered at clinicaltrials.gov as NCT01017783.

Mark Rogers,  Ian P. Wood,  S Fortmann … (1984)
Previous measures of physical activity for epidemiologic studies were considered inadequate to meet the needs of a community-based health education trial. Therefore, new methods of quantifying the physical activity habits of communities were developed which are practical for large health surveys, provide information on the distribution of activity habits in the population, can detect changes in activity over time, and can be compared with other epidemiologic studies of physical activity. Independent self-reports of vigorous activity (at least 6 metabolic equivalents (METs) ), moderate activity (3-5 METs), and total energy expenditure (kilocalories per day) are described, and the physical activity practices of samples of California cities are presented. Relationships between physical activity measures and age, education, occupation, ethnicity, marital status, and body mass index are analyzed, and the reliabilities of the three activity indices are reported. The new assessment procedure is contrasted with nine other measures of physical activity used in community surveys.

Effects of Internet behavioral counseling on weight loss in adults at risk for type 2 diabetes: a randomized trial.

Deborah Tate,  Elizabeth H Jackvony,  Rena R Wing (2003)
Weight loss programs on the Internet appear promising for short-term weight loss but have not been studied for weight loss in individuals at risk of type 2 diabetes; thus, the longer-term efficacy is unknown. To compare the effects of an Internet weight loss program alone vs with the addition of behavioral counseling via e-mail provided for 1 year to individuals at risk of type 2 diabetes. A single-center randomized controlled trial conducted from September 2001 to September 2002 in Providence, RI, of 92 overweight adults whose mean (SD) age was 48.5 (9.4) years and body mass index, 33.1 (3.8). Participants were randomized to a basic Internet (n = 46) or to an Internet plus behavioral e-counseling program (n = 46). Both groups received 1 face-to-face counseling session and the same core Internet programs and were instructed to submit weekly weights. Participants in e-counseling submitted calorie and exercise information and received weekly e-mail behavioral counseling and feedback from a counselor. Measured weight and waist circumference at 0 and 12 months. Intent-to-treat analyses showed the behavioral e-counseling group lost more mean (SD) weight at 12 months than the basic Internet group (-4.4 [6.2] vs -2.0 [5.7] kg; P =.04), and had greater decreases in percentage of initial body weight (4.8% vs 2.2%; P =.03), body mass index (-1.6 [2.2] vs -0.8 [2.1]; P =.03), and waist circumference (-7.2 [7.5] vs -4.4 [5.7] cm; P =.05). Adding e-mail counseling to a basic Internet weight loss intervention program significantly improved weight loss in adults at risk of diabetes.

This is a free access article, distributed under terms ( http://www.nutrition.org/publications/guidelines-and-policies/license/) which permit unrestricted non-commercial use, distribution, and reproduction in any medium, provided the original work is properly cited.