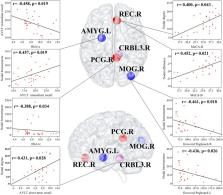 Yong-Kang He,  Zhang Chen,  Alan Evans (2008)
Recent research on Alzheimer's disease (AD) has shown that cognitive and memory decline in this disease is accompanied by disrupted changes in the coordination of large-scale brain functional networks. However, alterations in coordinated patterns of structural brain networks in AD are still poorly understood. Here, we used cortical thickness measurement from magnetic resonance imaging to investigate large-scale structural brain networks in 92 AD patients and 97 normal controls. Brain networks were constructed by thresholding cortical thickness correlation matrices of 54 regions and analyzed using graph theoretical approaches. Compared with controls, AD patients showed decreased cortical thickness intercorrelations between the bilateral parietal regions and increased intercorrelations in several selective regions involving the lateral temporal and parietal cortex as well as the cingulate and medial frontal cortex regions. Specially, AD patients showed abnormal small-world architecture in the structural cortical networks (increased clustering and shortest paths linking individual regions), implying a less optimal topological organization in AD. Moreover, AD patients were associated with reduced nodal centrality predominantly in the temporal and parietal heteromodal association cortex regions and increased nodal centrality in the occipital cortex regions. Finally, the brain networks of AD were about equally as robust to random failures as those of controls, but more vulnerable against targeted attacks, presumably because of the effects of pathological topological organization. Our findings suggest that the coordinated patterns of cortical morphology are widely altered in AD patients, thus providing structural evidence for disrupted integrity in large-scale brain networks that underlie cognition. This work has implications for our understanding of how functional deficits in patients are associated with their underlying structural (morphological) basis.

,  Frederik Barkhof,  Lars-Olof Wahlund … (2001)
MRI is more sensitive than CT for detection of age-related white matter changes (ARWMC). Most rating scales estimate the degree and distribution of ARWMC either on CT or on MRI, and they differ in many aspects. This makes it difficult to compare CT and MRI studies. To be able to study the evolution and possible effect of drug treatment on ARWMC in large patient samples, it is necessary to have a rating scale constructed for both MRI and CT. We have developed and evaluated a new scale and studied ARWMC in a large number of patients examined with both MRI and CT. Seventy-seven patients with ARWMC on either CT or MRI were recruited and a complementary examination (MRI or CT) performed. The patients came from 4 centers in Europe, and the scans were rated by 4 raters on 1 occasion with the new ARWMC rating scale. The interrater reliability was evaluated by using kappa statistics. The degree and distribution of ARWMC in CT and MRI scans were compared in different brain areas. Interrater reliability was good for MRI (kappa=0.67) and moderate for CT (kappa=0.48). MRI was superior in detection of small ARWMC, whereas larger lesions were detected equally well with both CT and MRI. In the parieto-occipital and infratentorial areas, MRI detected significantly more ARWMC than did CT. In the frontal area and basal ganglia, no differences between modalities were found. When a fluid-attenuated inversion recovery sequence was used, MRI detected significantly more lesions than CT in frontal and parieto-occipital areas. No differences were found in basal ganglia and infratentorial areas. We present a new ARWMC scale applicable to both CT and MRI that has almost equal sensitivity, except for certain regions. The interrater reliability was slightly better for MRI, as was the detectability of small lesions.

This article was submitted to Applied Neuroimaging, a section of the journal Frontiers in Neurology