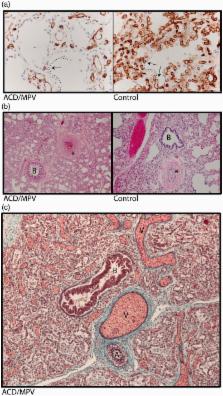 Alveolar capillary dysplasia with misalignment of the pulmonary veins (ACD/MPV) is a rare and lethal disorder mainly involving the vascular development of the lungs. Since its first description, significant achievements in research have led to a better understanding of the underlying molecular mechanism of ACD/MPV and genetic studies have identified associations with genomic alterations in the locus of the transcription factor FOXF1. This in turn has increased the awareness among clinicians resulting in over 200 cases reported so far, including genotyping of patients in most recent reports. Collectively, this promoted a better stratification of the patient group, leading to new perspectives in research on the pathogenesis. Here, we provide an overview of the clinical aspects of ACD/MPV, including guidance for clinicians, and review the ongoing research into the complex molecular mechanism causing this severe lung disorder.

Mattias Ormestad,  Henrik Landgren,  P Carlsson … (2006)
Development of the vertebrate gut is controlled by paracrine crosstalk between the endodermal epithelium and the associated splanchnic mesoderm. In the adult, the same types of signals control epithelial proliferation and survival, which account for the importance of the stroma in colon carcinoma progression. Here, we show that targeting murine Foxf1 and Foxf2, encoding forkhead transcription factors, has pleiotropic effects on intestinal paracrine signaling. Inactivation of both Foxf2 alleles, or one allele each of Foxf1 and Foxf2, cause a range of defects, including megacolon, colorectal muscle hypoplasia and agangliosis. Foxf expression in the splanchnic mesoderm is activated by Indian and sonic hedgehog secreted by the epithelium. In Foxf mutants, mesenchymal expression of Bmp4 is reduced, whereas Wnt5a expression is increased. Activation of the canonical Wnt pathway -- with nuclear localization of beta-catenin in epithelial cells -- is associated with over-proliferation and resistance to apoptosis. Extracellular matrix, particularly collagens, is severely reduced in Foxf mutant intestine, which causes epithelial depolarization and tissue disintegration. Thus, Foxf proteins are mesenchymal factors that control epithelial proliferation and survival, and link hedgehog to Bmp and Wnt signaling.

P Carlsson,  M Mahlapuu,  S Enerbäck (2001)
The murine Foxf1 gene, encoding a forkhead - or winged helix - transcription factor, is expressed in splanchnic mesenchyme during organogenesis. The concentration of expression to subepithelial mesenchyme suggested that Foxf1 is activated by paracrine signals from endodermal epithelia. Homozygous Foxf1-null mice die before embryonic day 10, owing to defects in extra-embryonic mesoderm, and do not provide any information about the role of Foxf1 in morphogenesis of endodermally derived organs. We show that, on CD1 genetic background, Foxf1 heterozygote perinatal mortality is around 90%. The haploinsufficiency causes a variable phenotype that includes lung immaturity and hypoplasia, fusion of right lung lobes, narrowing of esophagus and trachea, esophageal atresia and tracheo-esophageal fistula. Similar malformations are observed in mutants that are defective in the sonic hedgehog (Shh) signaling pathway, and we show that exogenous Shh activates transcription of Foxf1 in developing lung. Foxf1 mRNA is absent in the lungs, foregut and sclerotomes of Shh(-/-) embryos, but persists in tissues where indian hedgehog (Ihh) is expressed. In lung organ cultures, activation of Foxf1 by Shh is counteracted by bone morphogenetic protein 4 (BMP4). Fibroblast growth factor (FGF) 10 and FGF7 both decrease Foxf1 expression and we speculate that this is mediated by transcriptional activation of epithelial Bmp4 (in the case of FGF10) and by inhibition of Shh expression for FGF7.

Jose Jessurun,  Pawel Stankiewicz,  Piotr Dittwald … (2012)
An unanticipated and tremendous amount of the noncoding sequence of the human genome is transcribed. Long noncoding RNAs (lncRNAs) constitute a significant fraction of non-protein-coding transcripts; however, their functions remain enigmatic. We demonstrate that deletions of a small noncoding differentially methylated region at 16q24.1, including lncRNA genes, cause a lethal lung developmental disorder, alveolar capillary dysplasia with misalignment of pulmonary veins (ACD/MPV), with parent-of-origin effects. We identify overlapping deletions 250 kb upstream of FOXF1 in nine patients with ACD/MPV that arose de novo specifically on the maternally inherited chromosome and delete lung-specific lncRNA genes. These deletions define a distant cis-regulatory region that harbors, besides lncRNA genes, also a differentially methylated CpG island, binds GLI2 depending on the methylation status of this CpG island, and physically interacts with and up-regulates the FOXF1 promoter. We suggest that lung-transcribed 16q24.1 lncRNAs may contribute to long-range regulation of FOXF1 by GLI2 and other transcription factors. Perturbation of lncRNA-mediated chromatin interactions may, in general, be responsible for position effect phenomena and potentially cause many disorders of human development.