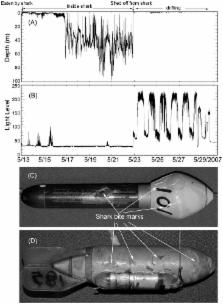 Predators can impact ecosystems through trophic cascades such that differential patterns in habitat use can lead to spatiotemporal variation in top down forcing on community dynamics. Thus, improved understanding of predator movements is important for evaluating the potential ecosystem effects of their declines.

We satellite-tagged an apex predator (bull sharks, Carcharhinus leucas) and a sympatric mesopredator (Atlantic tarpon, Megalops atlanticus) in southern Florida waters to describe their habitat use, abundance and movement patterns. We asked four questions: (1) How do the seasonal abundance patterns of bull sharks and tarpon compare? (2) How do the movement patterns of bull sharks and tarpon compare, and what proportion of time do their respective primary ranges overlap? (3) Do tarpon movement patterns (e.g., straight versus convoluted paths) and/or their rates of movement (ROM) differ in areas of low versus high bull shark abundance? and (4) Can any general conclusions be reached concerning whether tarpon may mitigate risk of predation by sharks when they are in areas of high bull shark abundance?

Michael Heithaus,  Alejandro Frid,  Aaron J Wirsing … (2008)
Recent studies document unprecedented declines in marine top predators that can initiate trophic cascades. Predicting the wider ecological consequences of these declines requires understanding how predators influence communities by inflicting mortality on prey and inducing behavioral modifications (risk effects). Both mechanisms are important in marine communities, and a sole focus on the effects of predator-inflicted mortality might severely underestimate the importance of predators. We outline direct and indirect consequences of marine predator declines and propose an integrated predictive framework that includes risk effects, which appear to be strongest for long-lived prey species and when resources are abundant. We conclude that marine predators should be managed for the maintenance of both density- and risk-driven ecological processes, and not demographic persistence alone.

Patterns and ecosystem consequences of shark declines in the ocean.

Francesco Ferretti,  Boris Worm,  Gregory Britten … (2010)
Whereas many land predators disappeared before their ecological roles were studied, the decline of marine apex predators is still unfolding. Large sharks in particular have experienced rapid declines over the last decades. In this study, we review the documented changes in exploited elasmobranch communities in coastal, demersal, and pelagic habitats, and synthesize the effects of sharks on their prey and wider communities. We show that the high natural diversity and abundance of sharks is vulnerable to even light fishing pressure. The decline of large predatory sharks reduces natural mortality in a range of prey, contributing to changes in abundance, distribution, and behaviour of small elasmobranchs, marine mammals, and sea turtles that have few other predators. Through direct predation and behavioural modifications, top-down effects of sharks have led to cascading changes in some coastal ecosystems. In demersal and pelagic communities, there is increasing evidence of mesopredator release, but cascading effects are more hypothetical. Here, fishing pressure on mesopredators may mask or even reverse some ecosystem effects. In conclusion, large sharks can exert strong top-down forces with the potential to shape marine communities over large spatial and temporal scales. Yet more empirical evidence is needed to test the generality of these effects throughout the ocean.

How to reliably estimate the tortuosity of an animal's path: straightness, sinuosity, or fractal dimension?

Simon Benhamou (2004)
The tortuosity of an animal's path is a key parameter in orientation and searching behaviours. The tortuosity of an oriented path is inversely related to the efficiency of the orientation mechanism involved, the best mechanism being assumed to allow the animal to reach its goal along a straight line movement. The tortuosity of a random search path controls the local searching intensity, allowing the animal to adjust its search effort to the local profitability of the environment. This paper shows that (1) the efficiency of an oriented path can be reliably estimated by a straightness index computed as the ratio between the distance from the starting point to the goal and the path length travelled to reach the goal, but such a simple index, ranging between 0 and 1, cannot be applied to random search paths; (2) the tortuosity of a random search path, ranging between straight line movement and Brownian motion, can be reliably estimated by a sinuosity index which combines the mean cosine of changes of direction with the mean step length; and (3) in the current state of the art, the fractal analysis of animals' paths, which may appear as an alternative and promising way to measure the tortuosity of a random search path as a fractal dimension ranging between 1 (straight line movement) and 2 (Brownian motion), is only liable to generate artifactual results. This paper also provides some help for distinguishing between oriented and random search paths, and depicts a general, comprehensive framework for analysing individual animals' paths in a two-dimensional space.

Competing Interests: The authors have received funding from the following commercial funder: Wells Fargo. This does not alter the authors’ adherence to all the PLOS ONE policies on sharing data and materials.

Funding for shark research was provided by the Batchelor Foundation, Wells-Fargo and the RJ Dunlap Marine Conservation Program at the University of Miami (UM); tarpon research was supported at the UM by the Tarpon and Bonefish Research Center through funding provided by the Bonefish & Tarpon Trust and the Robertson Foundation. The Funders had no role in study design, data collection and analysis, decision to publish, or preparation of the manuscript.