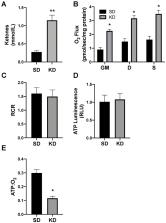 Objective: The rampant growth of obesity worldwide has stimulated explosive research into human metabolism. Energy expenditure has been shown to be altered by diets differing in macronutrient composition, with low-carbohydrate, ketogenic diets eliciting a significant increase over other interventions. The central aim of this study was to explore the effects of the ketone β-hydroxybutyrate (βHB) on mitochondrial bioenergetics in adipose tissue. Methods: We employed three distinct systems—namely, cell, rodent, and human models. Following exposure to elevated βHB, we obtained adipose tissue to quantify mitochondrial function. Results: In every model, βHB robustly increased mitochondrial respiration, including an increase of roughly 91% in cultured adipocytes, 113% in rodent subcutaneous adipose tissue (SAT), and 128% in human SAT. However, this occurred without a commensurate increase in adipose ATP production. Furthermore, in cultured adipocytes and rodent adipose, we quantified and observed an increase in the gene expression involved in mitochondrial biogenesis and uncoupling status following βHB exposure. Conclusions: In conclusion, βHB increases mitochondrial respiration, but not ATP production, in mammalian adipocytes, indicating altered mitochondrial coupling. These findings may partly explain the increased metabolic rate evident in states of elevated ketones, and may facilitate the development of novel anti-obesity interventions.

Fen Liu,  Eleftheria Maratos-Flier,  Ian R. Kennedy … (2007)
Ketogenic diets have been used as an approach to weight loss on the basis of the theoretical advantage of a low-carbohydrate, high-fat diet. To evaluate the physiological and metabolic effects of such diets on weight we studied mice consuming a very-low-carbohydrate, ketogenic diet (KD). This diet had profound effects on energy balance and gene expression. C57BL/6 mice animals were fed one of four diets: KD; a commonly used obesogenic high-fat, high-sucrose diet (HF); 66% caloric restriction (CR); and control chow (C). Mice on KD ate the same calories as mice on C and HF, but weight dropped and stabilized at 85% initial weight, similar to CR. This was consistent with increased energy expenditure seen in animals fed KD vs. those on C and CR. Microarray analysis of liver showed a unique pattern of gene expression in KD, with increased expression of genes in fatty acid oxidation pathways and reduction in lipid synthesis pathways. Animals made obese on HF and transitioned to KD lost all excess body weight, improved glucose tolerance, and increased energy expenditure. Analysis of key genes showed similar changes as those seen in lean animals placed directly on KD. Additionally, AMP kinase activity was increased, with a corresponding decrease in ACC activity. These data indicate that KD induces a unique metabolic state congruous with weight loss.

Guy Vijgen,  Nicole Bouvy,  G. Teule … (2011)
Background Cold-stimulated adaptive thermogenesis in brown adipose tissue (BAT) to increase energy expenditure is suggested as a possible therapeutic target for the treatment of obesity. We have recently shown high prevalence of BAT in adult humans, which was inversely related to body mass index (BMI) and body fat percentage (BF%), suggesting that obesity is associated with lower BAT activity. Here, we examined BAT activity in morbidly obese subjects and its role in cold-induced thermogenesis (CIT) after applying a personalized cooling protocol. We hypothesize that morbidly obese subjects show reduced BAT activity upon cold exposure. Methods and Findings After applying a personalized cooling protocol for maximal non-shivering conditions, BAT activity was determined using positron-emission tomography and computed tomography (PET-CT). Cold-induced BAT activity was detected in three out of 15 morbidly obese subjects. Combined with results from lean to morbidly obese subjects (n = 39) from previous study, the collective data show a highly significant correlation between BAT activity and body composition (P<0.001), respectively explaining 64% and 60% of the variance in BMI (r = 0.8; P<0.001) and BF% (r = 0.75; P<0.001). Obese individuals demonstrate a blunted CIT combined with low BAT activity. Only in BAT-positive subjects (n = 26) mean energy expenditure was increased significantly upon cold exposure (51.5±6.7 J/s versus 44.0±5.1 J/s, P = 0.001), and the increase was significantly higher compared to BAT-negative subjects (+15.5±8.9% versus +3.6±8.9%, P = 0.001), indicating a role for BAT in CIT in humans. Conclusions This study shows that in an extremely large range of body compositions, BAT activity is highly correlated with BMI and BF%. BAT-positive subjects showed higher CIT, indicating that BAT is also in humans involved in adaptive thermogenesis. Increasing BAT activity could be a therapeutic target in (morbid) obesity.

R Leibel,  M. Rosenbaum (2010)
The increasing prevalence of obesity and its comorbidities reflects the interaction of genes that favor the storage of excess energy as fat with an environment that provides ad libitum availability of energy-dense foods and encourages an increasingly sedentary lifestyle. Although weight reduction is difficult in and of itself, anyone who has ever lost weight will confirm that it is much harder to keep the weight off once it has been lost. The over 80% recidivism rate to preweight loss levels of body fatness after otherwise successful weight loss is due to the coordinate actions of metabolic, behavioral, neuroendocrine and autonomic responses designed to maintain body energy stores (fat) at a central nervous system-defined 'ideal'. This 'adaptive thermogenesis' creates the ideal situation for weight regain and is operant in both lean and obese individuals attempting to sustain reduced body weights. Much of this opposition to sustained weight loss is mediated by the adipocyte-derived hormone 'leptin'. The multiple systems regulating energy stores and opposing the maintenance of a reduced body weight illustrate that body energy stores in general and obesity in particular are actively 'defended' by interlocking bioenergetic and neurobiological physiologies. Important inferences can be drawn for therapeutic strategies by recognizing obesity as a disease in which the human body actively opposes the 'cure' over long periods of time beyond the initial resolution of symptomatology.