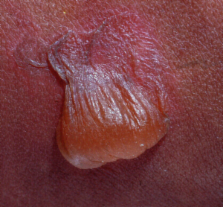 Inherited epidermolysis bullosa (EB) encompasses a number of disorders characterized by recurrent blister formation as the result of structural fragility within the skin and selected other tissues. All types and subtypes of EB are rare; the overall incidence and prevalence of the disease within the United States is approximately 19 per one million live births and 8 per one million population, respectively. Clinical manifestations range widely, from localized blistering of the hands and feet to generalized blistering of the skin and oral cavity, and injury to many internal organs. Each EB subtype is known to arise from mutations within the genes encoding for several different proteins, each of which is intimately involved in the maintenance of keratinocyte structural stability or adhesion of the keratinocyte to the underlying dermis. EB is best diagnosed and subclassified by the collective findings obtained via detailed personal and family history, in concert with the results of immunofluorescence antigenic mapping, transmission electron microscopy, and in some cases, by DNA analysis. Optimal patient management requires a multidisciplinary approach, and revolves around the protection of susceptible tissues against trauma, use of sophisticated wound care dressings, aggressive nutritional support, and early medical or surgical interventions to correct whenever possible the extracutaneous complications. Prognosis varies considerably and is based on both EB subtype and the overall health of the patient.

Jo-David Fine,  Robin Eady,  Eugene A. Bauer … (2008)
Since publication in 2000 of the Second International Consensus Report on Diagnosis and Classification of Epidermolysis Bullosa, many advances have been made to our understanding of this group of diseases, both clinically and molecularly. At the same time, new epidermolysis bullosa (EB) subtypes have been described and similarities with some other diseases have been identified. We sought to arrive at a new consensus of the classification of EB subtypes. We now present a revised classification system that takes into account the new advances, as well as encompassing other inherited diseases that should also be included within the EB spectrum, based on the presence of blistering and mechanical fragility. Current recommendations are made on the use of specific diagnostic tests, with updates on the findings known to occur within each of the major EB subtypes. Electronic links are also provided to informational and laboratory resources of particular benefit to clinicians and their patients. As more becomes known about this disease, future modifications may be needed. The classification system has been designed with sufficient flexibility for these modifications. This revised classification system should assist clinicians in accurately diagnosing and subclassifying patients with EB.

Fulvio Mavilio,  Graziella Pellegrini,  Stefano Ferrari … (2006)
The continuous renewal of human epidermis is sustained by stem cells contained in the epidermal basal layer and in hair follicles. Cultured keratinocyte stem cells, known as holoclones, generate sheets of epithelium used to restore severe skin, mucosal and corneal defects. Mutations in genes encoding the basement membrane component laminin 5 (LAM5) cause junctional epidermolysis bullosa (JEB), a devastating and often fatal skin adhesion disorder. Epidermal stem cells from an adult patient affected by LAM5-beta3-deficient JEB were transduced with a retroviral vector expressing LAMB3 cDNA (encoding LAM5-beta3), and used to prepare genetically corrected cultured epidermal grafts. Nine grafts were transplanted onto surgically prepared regions of the patient's legs. Engraftment was complete after 8 d. Synthesis and proper assembly of normal levels of functional LAM5 were observed, together with the development of a firmly adherent epidermis that remained stable for the duration of the follow-up (1 year) in the absence of blisters, infections, inflammation or immune response. Retroviral integration site analysis indicated that the regenerated epidermis is maintained by a defined repertoire of transduced stem cells. These data show that ex vivo gene therapy of JEB is feasible and leads to full functional correction of the disease.

Fenella Wojnarowska,  Julia Wiebe,  Ilona Frieden … (2003)
Kindler syndrome is an autosomal recessive disorder characterized by neonatal blistering, sun sensitivity, atrophy, abnormal pigmentation, and fragility of the skin. Linkage and homozygosity analysis in an isolated Panamanian cohort and in additional inbred families mapped the gene to 20p12.3. Loss-of-function mutations were identified in the FLJ20116 gene (renamed "KIND1" [encoding kindlin-1]). Kindlin-1 is a human homolog of the Caenorhabditis elegans protein UNC-112, a membrane-associated structural/signaling protein that has been implicated in linking the actin cytoskeleton to the extracellular matrix (ECM). Thus, Kindler syndrome is, to our knowledge, the first skin fragility disorder caused by a defect in actin-ECM linkage, rather than keratin-ECM linkage.