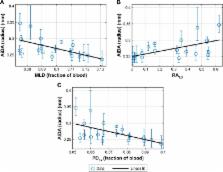 Nineteen never-smoking volunteers performed nanoparticle inhalation tests at multiple breath-hold times, and the difference in nanoparticle concentration of inhaled and exhaled gas was measured. An exponential decay curve was fitted to the concentration of recovered nanoparticles, and airspace dimensions were assessed from the half-life of the decay. Pulmonary tissue density was measured using magnetic resonance imaging (MRI).

The AiDA method shows potential to be developed into a tool to assess conditions involving changes in distal airways, eg, emphysema. The intercept may reflect airway properties; this finding should be further investigated.

Jonas E N Müller,  Michael R. Miller,  Miranda Staples … (1988)
We used a computed tomography (CT) scanner program ("density mask") that highlights voxels within a given density range to quantitate emphysema by defining areas of abnormally low attenuation. We compared different density masks, mean lung attenuation, visual assessment of emphysema and the pathologic grade of emphysema in 28 patients undergoing lung resection for tumor. In each patient, a single representative CT image was compared with corresponding pathologic specimens of tissue. There was good correlation between the extent of emphysema as assessed by the density mask and the pathologic grade of emphysema. The optimal attenuation level to define areas of emphysema may vary in different scanners, but, once determined for a particular scanner, the density mask accurately assesses the extent of emphysema and eliminates interobserver and intraobserver variability. It has the added advantage of determining the exact percentage of lung parenchyma showing changes consistent with emphysema.

Tariq Madani,  J Zanen,  Pierre Alain Gevenois … (2006)
To prospectively compare pulmonary function tests and helical computed tomographic (CT) indexes for quantifying pulmonary emphysema with macroscopic and microscopic morphometry. The investigation was approved by the local ethics committee, and written informed consent was obtained from patients. Multi-detector row CT of the thorax was performed with simultaneous acquisition of four 1-mm sections in 80 patients (57 men, 23 women; age range, 38-79 years) referred for surgical resection of lung cancer. From the raw data, 1.25-mm-thick sections were reconstructed at 10-mm intervals. Relative areas of lung with attenuation coefficients lower than nine thresholds and eight percentiles of the distribution of attenuation coefficients were calculated. Relative areas and percentiles were compared with areas found macroscopically to have emphysema and with two microscopic indexes assessed on resected specimens. Pulmonary function tests were measured 24-48 hours before surgery. Spearman correlation coefficients were calculated between each set of CT data obtained with the nine tested thresholds and eight percentiles with macroscopic and microscopic measurements. For relative lung areas, the strongest correlation with macroscopy was observed with a threshold of -970 HU (r = 0.543, P < .001) and that with microscopy was observed at -960 and -970 HU, depending on the index considered (r = 0.592, P < .001 and r = -0.546, P < .001, respectively). For percentiles, 1st percentile showed the strongest correlation with both macroscopy (r = -0.463, P < .001) and microscopy (r = -0.573, P < .001; and r = 0.523, P < .001 for each microscopic measurement). Forced expiratory volume in 1 second and vital capacity ratio, diffusing capacity of lung for carbon monoxide, and each of the three CT indexes were complementary to predict microscopic indexes. Relative lung areas with attenuation coefficients lower than -960 or -970 HU and 1st percentile are valid indexes to quantify pulmonary emphysema on multi-detector row CT scans. Copyright RSNA, 2006.