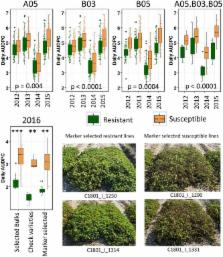 Satoshi Natsume,  Aiko Uemura,  Hideki Innan … (2013)
The majority of agronomically important crop traits are quantitative, meaning that they are controlled by multiple genes each with a small effect (quantitative trait loci, QTLs). Mapping and isolation of QTLs is important for efficient crop breeding by marker-assisted selection (MAS) and for a better understanding of the molecular mechanisms underlying the traits. However, since it requires the development and selection of DNA markers for linkage analysis, QTL analysis has been time-consuming and labor-intensive. Here we report the rapid identification of plant QTLs by whole-genome resequencing of DNAs from two populations each composed of 20-50 individuals showing extreme opposite trait values for a given phenotype in a segregating progeny. We propose to name this approach QTL-seq as applied to plant species. We applied QTL-seq to rice recombinant inbred lines and F2 populations and successfully identified QTLs for important agronomic traits, such as partial resistance to the fungal rice blast disease and seedling vigor. Simulation study showed that QTL-seq is able to detect QTLs over wide ranges of experimental variables, and the method can be generally applied in population genomics studies to rapidly identify genomic regions that underwent artificial or natural selective sweeps. © 2013 The Authors The Plant Journal © 2013 Blackwell Publishing Ltd.

Hongfeng Lu,  Tao Lin,  Joël Klein … (2014)
Next-generation sequencing enabled a fast discovery of a major QTL controlling early flowering in cucumber, corresponding to the FT gene conditioning flowering time in Arabidopsis. Next-generation sequencing technologies are making it faster and more efficient to establish the association of agronomic traits with molecular markers or candidate genes, which is the requirement for marker-assisted selection in molecular breeding. Early flowering is an important agronomic trait in cucumber (Cucumis sativus L.), but the underlying genetic mechanism is unknown. In this study, we identified a candidate gene for early flowering QTL, Ef1.1 through QTL-seq. Segregation analysis in F2 and BC1 populations derived from a cross between two inbred lines "Muromskij" (early flowering) and "9930" (late flowering) suggested quantitative nature of flowering time in cucumber. Genome-wide comparison of SNP profiles between the early and late-flowering bulks constructed from F2 plants identified a major QTL, designated Ef1.1 on cucumber chromosome 1 for early flowering in Muromskij, which was confirmed by microsatellite marker-based classical QTL mapping in the F2 population. Joint QTL-seq and traditional QTL analysis delimited Ef1.1 to an 890 kb genomic region. A cucumber gene, Csa1G651710, was identified in this region, which is a homolog of the FLOWERING LOCUS T (FT), the main flowering switch gene in Arabidopsis. Quantitative RT-PCR study of the expression level of Csa1G651710 revealed significantly higher expression in early flowering genotypes. Data presented here provide support for Csa1G651710 as a possible candidate gene for early flowering in the cucumber line Muromskij.