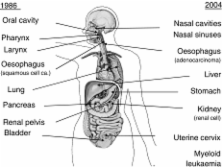 Monographs on the Evaluation of Carcinogenis Risk to Humans

The Science and Practice of Carcinogen Identification and Evaluation

Vincent James Cogliano,  Robert A. Baan,  Kurt Straif … (2004)
Several national and international health agencies have established programs with the aim of identifying agents and exposures that cause cancer in humans. Carcinogen identification is an activity grounded in the scientific evaluation of the results of human epidemiologic studies, long-term bioassays in experimental animals, and other data relevant to an evaluation of carcinogenicity and its mechanisms. In this commentary, after a brief discussion of the science basis common to the evaluation of carcinogens across different programs, we discuss in more detail the principles and procedures currently used by the IARC Monographs program.