Assessment and management of behavioral and psychological symptoms of dementia 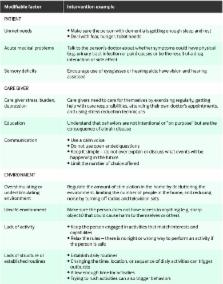 Behavioral and psychological symptoms of dementia include agitation, depression, apathy, repetitive questioning, psychosis, aggression, sleep problems, wandering, and a variety of inappropriate behaviors. One or more of these symptoms will affect nearly all people with dementia over the course of their illness. These symptoms are among the most complex, stressful, and costly aspects of care, and they lead to a myriad of poor patient health outcomes, healthcare problems, and income loss for family care givers. The causes include neurobiologically related disease factors; unmet needs; care giver factors; environmental triggers; and interactions of individual, care giver, and environmental factors. The complexity of these symptoms means that there is no “one size fits all solution,” and approaches tailored to the patient and the care giver are needed. Non-pharmacologic approaches should be used first line, although several exceptions are discussed. Non-pharmacologic approaches with the strongest evidence base involve family care giver interventions. Regarding pharmacologic treatments, antipsychotics have the strongest evidence base, although the risk to benefit ratio is a concern. An approach to integrating non-pharmacologic and pharmacologic treatments is described. Finally, the paradigm shift needed to fully institute tailored treatments for people and families dealing with these symptoms in the community is discussed.

The Neuropsychiatric Inventory: comprehensive assessment of psychopathology in dementia.

J L Cummings,  M. Mega,  K. Gray … (1994)
We developed a new instrument, the Neuropsychiatric Inventory (NPI), to assess 10 behavioral disturbances occurring in dementia patients: delusions, hallucinations, dysphoria, anxiety, agitation/aggression, euphoria, disinhibition, irritability/lability, apathy, and aberrant motor activity. The NPI uses a screening strategy to minimize administration time, examining and scoring only those behavioral domains with positive responses to screening questions. Both the frequency and the severity of each behavior are determined. Information for the NPI is obtained from a caregiver familiar with the patient's behavior. Studies reported here demonstrate the content and concurrent validity as well as between-rater, test-retest, and internal consistency reliability; the instrument is both valid and reliable. The NPI has the advantages of evaluating a wider range of psychopathology than existing instruments, soliciting information that may distinguish among different etiologies of dementia, differentiating between severity and frequency of behavioral changes, and minimizing administration time.

From sensation to cognition.

M. Mesulam (1998)
Sensory information undergoes extensive associative elaboration and attentional modulation as it becomes incorporated into the texture of cognition. This process occurs along a core synaptic hierarchy which includes the primary sensory, upstream unimodal, downstream unimodal, heteromodal, paralimbic and limbic zones of the cerebral cortex. Connections from one zone to another are reciprocal and allow higher synaptic levels to exert a feedback (top-down) influence upon earlier levels of processing. Each cortical area provides a nexus for the convergence of afferents and divergence of efferents. The resultant synaptic organization supports parallel as well as serial processing, and allows each sensory event to initiate multiple cognitive and behavioural outcomes. Upstream sectors of unimodal association areas encode basic features of sensation such as colour, motion, form and pitch. More complex contents of sensory experience such as objects, faces, word-forms, spatial locations and sound sequences become encoded within downstream sectors of unimodal areas by groups of coarsely tuned neurons. The highest synaptic levels of sensory-fugal processing are occupied by heteromodal, paralimbic and limbic cortices, collectively known as transmodal areas. The unique role of these areas is to bind multiple unimodal and other transmodal areas into distributed but integrated multimodal representations. Transmodal areas in the midtemporal cortex, Wernicke's area, the hippocampal-entorhinal complex and the posterior parietal cortex provide critical gateways for transforming perception into recognition, word-forms into meaning, scenes and events into experiences, and spatial locations into targets for exploration. All cognitive processes arise from analogous associative transformations of similar sets of sensory inputs. The differences in the resultant cognitive operation are determined by the anatomical and physiological properties of the transmodal node that acts as the critical gateway for the dominant transformation. Interconnected sets of transmodal nodes provide anatomical and computational epicentres for large-scale neurocognitive networks. In keeping with the principles of selectively distributed processing, each epicentre of a large-scale network displays a relative specialization for a specific behavioural component of its principal neurospychological domain. The destruction of transmodal epicentres causes global impairments such as multimodal anomia, neglect and amnesia, whereas their selective disconnection from relevant unimodal areas elicits modality-specific impairments such as prosopagnosia, pure word blindness and category-specific anomias. The human brain contains at least five anatomically distinct networks. The network for spatial awareness is based on transmodal epicentres in the posterior parietal cortex and the frontal eye fields; the language network on epicentres in Wernicke's and Broca's areas; the explicit memory/emotion network on epicentres in the hippocampal-entorhinal complex and the amygdala; the face-object recognition network on epicentres in the midtemporal and temporopolar cortices; and the working memory-executive function network on epicentres in the lateral prefrontal cortex and perhaps the posterior parietal cortex. Individual sensory modalities give rise to streams of processing directed to transmodal nodes belonging to each of these networks. The fidelity of sensory channels is actively protected through approximately four synaptic levels of sensory-fugal processing. The modality-specific cortices at these four synaptic levels encode the most veridical representations of experience. Attentional, motivational and emotional modulations, including those related to working memory, novelty-seeking and mental imagery, become increasingly more pronounced within downstream components of unimodal areas, where they help to create a highly edited subjective version of the world. (ABSTRACT TRUNCATED)

M. Marcel Mesulam (1990)
Cognition and comportment are subserved by interconnected neural networks that allow high-level computational architectures including parallel distributed processing. Cognitive problems are not resolved by a sequential and hierarchical progression toward predetermined goals but instead by a simultaneous and interactive consideration of multiple possibilities and constraints until a satisfactory fit is achieved. The resultant texture of mental activity is characterized by almost infinite richness and flexibility. According to this model, complex behavior is mapped at the level of multifocal neural systems rather than specific anatomical sites, giving rise to brain-behavior relationships that are both localized and distributed. Each network contains anatomically addressed channels for transferring information content and chemically addressed pathways for modulating behavioral tone. This approach provides a blueprint for reexploring the neurological foundations of attention, language, memory, and frontal lobe function.