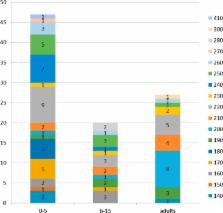 We assessed Plasmodium ( P.) falciparum allelic diversity based on clinical severity and age. The study was conducted from 2011 to 2012 in Libreville, Gabon where malaria prevalence was 24.5%. The polymorphism of the merozoite surface protein-1 ( msp1) locus was analyzed in isolates from patients with complicated and uncomplicated malaria. Blood was collected on filter paper. After DNA extraction, genotyping of the msp1 gene was performed using nested PCR. The K1, Ro33, and Mad20 allelic families were detected in 71 (63%), 64 (57%), and 38 (34%) of the 112 analyzed samples, respectively. Overall, 17 K1 and 11 Mad20 alleles were detected. There was no association between msp1 allelic families and age. Mad20 allelic diversity increased with the severity of malaria. The number of K1 and Mad20 alleles decreased with age. The multiplicity of infection (MOI) was 1–6 genotypes and the complexity of infection (COI) 1.8 ± 1. The COI differed based on age: it was 1.9 (±1.1) in the isolates from adults, 1.8 (±1.1) in those from 0–5 year-old children, whereas it tended to be lower (1.6 ± 0.8) in those from 6–15 year-old children. Extensive genetic diversity is found in P. falciparum strains circulating in Libreville. The number of specific msp1 alleles increased with clinical severity, suggesting an association between the diversity and the severity of malaria.

J. Williams,  John A Brockman,  J Mokili … (2000)
Multilocus genotyping of microbial pathogens has revealed a range of population structures, with some bacteria showing extensive recombination and others showing almost complete clonality. The population structure of the protozoan parasite Plasmodium falciparum has been harder to evaluate, since most studies have used a limited number of antigen-encoding loci that are known to be under strong selection. We describe length variation at 12 microsatellite loci in 465 infections collected from 9 locations worldwide. These data reveal dramatic differences in parasite population structure in different locations. Strong linkage disequilibrium (LD) was observed in six of nine populations. Significant LD occurred in all locations with prevalence <1% and in only two of five of the populations from regions with higher transmission intensities. Where present, LD results largely from the presence of identical multilocus genotypes within populations, suggesting high levels of self-fertilization in populations with low levels of transmission. We also observed dramatic variation in diversity and geographical differentiation in different regions. Mean heterozygosities in South American countries (0.3-0.4) were less than half those observed in African locations (0. 76-0.8), with intermediate heterozygosities in the Southeast Asia/Pacific samples (0.51-0.65). Furthermore, variation was distributed among locations in South America (F:(ST) = 0.364) and within locations in Africa (F:(ST) = 0.007). The intraspecific patterns of diversity and genetic differentiation observed in P. falciparum are strikingly similar to those seen in interspecific comparisons of plants and animals with differing levels of outcrossing, suggesting that similar processes may be involved. The differences observed may also reflect the recent colonization of non-African populations from an African source, and the relative influences of epidemiology and population history are difficult to disentangle. These data reveal a range of population structures within a single pathogen species and suggest intimate links between patterns of epidemiology and genetic structure in this organism.

Relation between severe malaria morbidity in children and level of Plasmodium falciparum transmission in Africa.

G. R. Snow,  Sandeep Gupta,  C. Jamie Newbold … (1997)
Malaria remains a major cause of mortality and morbidity in Africa. Many approaches to malaria control involve reducing the chances of infection but little is known of the relations between parasite exposure and the development of effective clinical immunity so the long-term effect of such approaches to control on the pattern and frequency of malaria cannot be predicted. We have prospectively recorded paediatric admissions with severe malaria over three to five years from five discrete communities in The Gambia and Kenya. Demographic analysis of the communities exposed to disease risk allowed the estimation of age-specific rates for severe malaria. Within each community the exposure to Plasmodium falciparum infection was determined through repeated parasitological and serological surveys among children and infants. We used acute respiratory-tract infections (ARI) as a comparison. 3556 malaria admissions were recorded for the five sites. Marked differences were observed in age, clinical spectrum and rates of severe malaria between the five sites. Paradoxically, the risks of severe disease in childhood were lowest among populations with the highest transmission intensities, and the highest disease risks were observed among populations exposed to low-to-moderate intensities of transmission. For severe malaria, for example, admission rates (per 1000 per year) for children up to their 10th birthday were estimated as 3.9, 25.8, 25.9, 16.7, and 18.0 in the five communities; the forces of infection estimated for those communities (new infections per infant per month) were 0.001, 0.034, 0.050, 0.093, and 0.176, respectively. Similar trends were noted for cerebral malaria and for severe malaria anaemia but not for ARI. Mean age of disease decreased with increasing transmission intensity. We propose that a critical determinant of life-time disease risk is the ability to develop clinical immunity early in life during a period when other protective mechanisms may operate. In highly endemic areas measures which reduce parasite transmission, and thus immunity, may lead to a change in both the clinical spectrum of severe disease and the overall burden of severe malaria morbidity.

Jakob S. Jespersen,  Catherine Turner,  Sanne Berger … (2012)
The clinical outcome of Plasmodium falciparum infections ranges from asymptomatic parasitemia to severe malaria syndromes associated with high mortality. The virulence of P. falciparum infections is associated with the type of P. falciparum erythrocyte membrane protein 1 (PfEMP1) expressed on the surface of infected erythrocytes to anchor these to the vascular lining. Although var2csa, the var gene encoding the PfEMP1 associated with placental malaria, was discovered in 2003, the identification of the var/PfEMP1 variants associated with severe malaria in children has remained elusive. To identify var/PfEMP1 variants associated with severe disease outcome, we compared var transcript levels in parasites from 88 children with severe malaria and 40 children admitted to the hospital with uncomplicated malaria. Transcript analysis was performed by RT-quantitative PCR using a set of 42 primer pairs amplifying var subtype-specific loci covering most var/PfEMP1 subtypes. In addition, we characterized the near-full-length sequence of the most prominently expressed var genes in three patients diagnosed with severe anemia and/or cerebral malaria. The combined analysis showed that severe malaria syndromes, including severe anemia and cerebral malaria, are associated with high transcript levels of PfEMP1 domain cassette 8-encoding var genes. Transcript levels of group A var genes, including genes encoding domain cassette 13, were also significantly higher in patients with severe syndromes compared with those with uncomplicated malaria. This study specifies the var/PfEMP1 types expressed in severe malaria in children, and thereby provides unique targets for future efforts to prevent and treat severe malaria infections.