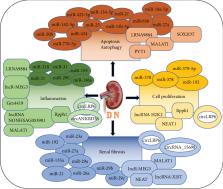 The correlation between diabetes and systematic well-being on human life has long established. As a common complication of diabetes, the prevalence of diabetic nephropathy (DN) has been increasing globally. DN is known to be a major cause of end-stage kidney disease (ESKD). Till now, the molecular mechanisms for DN have not been fully explored and the effective therapies are still lacking. Noncoding RNAs are a class of RNAs produced by genome transcription that cannot be translated into proteins. It has been documented that ncRNAs participate in the pathogenesis of DN by regulating inflammation, apoptosis, autophagy, cell proliferation, and other pathological processes. In this review, the pathological roles and diagnostic and therapeutic potential of three types of ncRNAs (microRNA, long noncoding RNA, and circular RNA) in the progression of DN are summarized and illustrated.

Prasanth Puthanveetil,  Shali Chen,  Biao Feng … (2015)
To examine whether the long non-coding RNA (lncRNA) metastasis associated lung adenocarcinoma transcript 1 (MALAT1) is altered in the endothelial cells in response to glucose and the significance of such alteration. We incubated human umbilical vein endothelial cells with media containing various glucose levels. We found an increase in MALAT1 expression peaking after 12 hrs of incubation in high glucose. This increase was associated with parallel increase in serum amyloid antigen 3 (SAA3), an inflammatory ligand and target of MALAT1 and was further accompanied by increase in mRNAs and proteins of inflammatory mediators, tumour necrosis factor alpha (TNF-α) and interleukin 6 (IL-6). Renal tissue from the diabetic animals showed similar changes. Such cellular alterations were prevented following MALAT1 specific siRNA transfection. Results of this study indicate that LncRNA MALAT1 regulates glucose-induced up-regulation of inflammatory mediators IL-6 and TNF-α through activation of SAA3. Identification of such novel mechanism may lead to the development of RNA-based therapeutics targeting MALAT1 for diabetes-induced micro and macro vascular complications.

miR-21 is a key therapeutic target for renal injury in a mouse model of type 2 diabetes.

X Meng,  H. Chen,  Rui-Juan Li … (2013)
As microRNA-21 (miR-21) plays a pathological role in fibrosis, we hypothesised that it may be a therapeutic target for diabetic nephropathy. Abundance of miR-21 was examined in diabetic kidneys from db/db mice. The therapeutic potential of miR-21 in diabetic kidney injury was examined in db/db mice by an ultrasound-microbubble-mediated miR-21 small hairpin RNA transfer. In addition, the role and mechanisms of miR-21 in diabetic renal injury were examined in vitro under diabetic conditions in rat mesangial and tubular epithelial cell lines by overexpressing or downregulating miR-21. In db/db mice, a mouse model of type 2 diabetes, renal miR-21 at age 20 weeks was increased twofold compared with db/m (+) mice at the same age, and this increase was associated with the development of microalbuminuria and renal fibrosis and inflammation. More importantly, gene transfer of miR-21 knockdown plasmids into the diabetic kidneys of db/db mice at age 10 weeks significantly ameliorated microalbuminuria and renal fibrosis and inflammation at age 20 weeks, revealing a therapeutic potential for diabetic nephropathy by targeting miR-21. Overexpression of miR-21 in kidney cells enhanced, but knockdown of miR-21 suppressed, high-glucose-induced production of fibrotic and inflammatory markers. Targeting Smad7 may be a mechanism by which miR-21 regulates renal injury because knockdown of renal miR-21 restored Smad7 levels and suppressed activation of the TGF-β and NF-κB signalling pathways. Inhibition of miR-21 might be an effective therapy for diabetic nephropathy.

Hong Liang Yi,  Rui Peng,  Lu-yu Zhang … (2017)
Diabetic nephropathy (DN) as the primary cause of end-stage kidney disease is a common complication of diabetes. Recent researches have shown the activation of nuclear factor kappa light-chain enhancer of activated B cells (NF-κB) and NACHT, LRR and PYD domain-containing protein 3 (NLRP3) inflammasome are associated with inflammation in the progression of DN, but the exact mechanism is unclear. Long noncoding RNAs (lncRNAs) have roles in the development of many diseases including DN. However, the relationship between lncRNAs and inflammation in DN remains largely unknown. Our previous study has revealed that 14 lncRNAs are abnormally expressed in DN by RNA sequencing and real-time quantitative PCR (qRT-PCR) in the renal tissues of db/db DN mice. In this study, these lncRNAs were verified their expressions by qRT-PCR in mesangial cells (MCs) cultured under high- and low-glucose conditions. Twelve lncRNAs displayed the same expressional tendencies in both renal tissues and MCs. In particular, long intergenic noncoding RNA (lincRNA)-Gm4419 was the only one associating with NF-κB among these 12 lncRNAs by bioinformatics methods. Moreover, Gm4419 knockdown could obviously inhibit the expressions of pro-inflammatory cytokines and renal fibrosis biomarkers, and reduce cell proliferation in MCs under high-glucose condition, whereas overexpression of Gm4419 could increase the inflammation, fibrosis and cell proliferation in MCs under low-glucose condition. Interestingly, our results showed that Gm4419 could activate the NF-κB pathway by directly interacting with p50, the subunit of NF-κB. In addition, we found that p50 could interact with NLRP3 inflammasome in MCs. In conclusion, our findings suggest lincRNA-Gm4419 may participate in the inflammation, fibrosis and proliferation in MCs under high-glucose condition through NF-κB/NLRP3 inflammasome signaling pathway, and may provide new insights into the regulation of Gm4419 during the progression of DN.