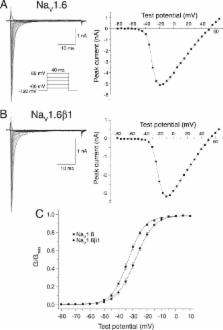 The Na v1.6 voltage-gated sodium channel α subunit isoform is abundantly expressed in the adult rat brain. To assess the functional modulation of Na v1.6 channels by the auxiliary β1 subunit we expressed the rat Na v1.6 sodium channel α subunit by stable transformation in HEK293 cells either alone or in combination with the rat β1 subunit and assessed the properties of the reconstituted channels by recording sodium currents using the whole-cell patch clamp technique. Coexpression with the β1 subunit accelerated the inactivation of sodium currents and shifted the voltage dependence of channel activation and steady-state fast inactivation by approximately 5–7 mV in the direction of depolarization. By contrast the β1 subunit had no effect on the stability of sodium currents following repeated depolarizations at high frequencies. Our results define modulatory effects of the β1 subunit on the properties of rat Na v1.6-mediated sodium currents reconstituted in HEK293 cells that differ from effects measured previously in the Xenopus oocyte expression system. We also identify differences in the kinetic and gating properties of the rat Na v1.6 channel expressed in the absence of the β1 subunit compared to the properties of the orthologous mouse and human channels expressed in this system.

Characteristics of a human cell line transformed by DNA from human adenovirus type 5.

J Smiley,  John Nairn,  Anthony Russell … (1977)
Human embryonic kidney cells have been transformed by exposing cells to sheared fragments of adenovirus type 5 DNA. The transformed cells (designated 293 cells) exhibited many of the characteristics of transformation including the elaboration of a virus-specific tumour antigen. Analysis of the polypeptides synthesized in the 293 cells by labelling with 35S-methionine and SDS PAGE showed a variable pattern of synthesis, different in a number of respects from that seen in otheruman cells. On labelling the surface of cells by lactoperoxidase catalysed radio-iodination, the absence of a labelled polypeptide analogous to the 250 K (LETS) glycoprotein was noted. Hybridization of labelled cellular RNA with restriction fragments of adenovirus type 5 DNA indicated transcription of a portion of the adenovirus genome at the conventional left hand end.

From ionic currents to molecular mechanisms: the structure and function of voltage-gated sodium channels.

Preferential transformation of human neuronal cells by human adenoviruses and the origin of HEK 293 cells.

Gerry Shaw,  S. F. Graham,  Miguel Ararat … (2002)
The 293 cell line was derived by transformation of primary cultures of human embryonic kidney (HEK) cells with sheared adenovirus (Ad)5 DNA. A combination of immunostaining, immunoblot, and microarray analysis showed that 293 cells express the neurofilament (NF) subunits NF-L, NF-M, NF-H, and a-internexin as well as many other proteins typically found in neurons. Three other independently derived HEK lines, two transformed by Ad5 and one by Ad12, also expressed NFs, as did one human embryonic retinal cell line transformed with Ad5. Two rodent kidney lines transformed with Ad12 were also found to express NF proteins, although several rodent kidney cell lines transformed by Ad5 DNA and three HEK cell lines transformed by the SV40 early region did not express NFs. These results suggest that human Ads preferentially transform human neuronal lineage cells. We also demonstrate that the widely used HEK293 cells have an unexpected relationship to neurons, a finding that may require reinterpretation of many previous studies in which it was assumed that HEK293 cells resembled more typical kidney epithelial cells.

Competing Interests: The authors declare that no competing interests exist.

This study was supported in part by grants (R01-ES013686 and R01-014591) from the National Institute of Environmental Health Sciences, National Institutes of Health. The funders had no role in study design, data collection and analysis, decision to publish, or preparation of the manuscript.