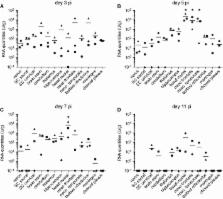 Pigs are considered to be the main amplifying host for Japanese encephalitis virus (JEV), and their infection can correlate with human cases of disease. Despite their importance in the ecology of the virus as it relates to human cases of encephalitis, the pathogenesis of JEV in pigs remains obscure. In the present study, the localization and kinetics of virus replication were investigated in various tissues after experimental intravenous infection of pigs. The data demonstrate a rapid and broad spreading of the virus to the central nervous system (CNS) and various other organs. A particular tropism of JEV in pigs not only to the CNS but also for secondary lymphoid tissue, in particular the tonsils with the overall highest viral loads, was observed. In this organ, even 11 days post infection, the latest time point of the experiment, no apparent decrease in viral RNA loads and live virus was found despite the presence of a neutralizing antibody response. This was also well beyond the clinical and viremic phase. These results are of significance for the pathogenesis of JEV, and call for further experimental studies focusing on the cellular source and duration of virus replication in pigs.

Ian G. Campbell,  C Hoke,  Joachim Hombach … (2011)
To update the estimated global incidence of Japanese encephalitis (JE) using recent data for the purpose of guiding prevention and control efforts. Thirty-two areas endemic for JE in 24 Asian and Western Pacific countries were sorted into 10 incidence groups on the basis of published data and expert opinion. Population-based surveillance studies using laboratory-confirmed cases were sought for each incidence group by a computerized search of the scientific literature. When no eligible studies existed for a particular incidence group, incidence data were extrapolated from related groups. A total of 12 eligible studies representing 7 of 10 incidence groups in 24 JE-endemic countries were identified. Approximately 67,900 JE cases typically occur annually (overall incidence: 1.8 per 100,000), of which only about 10% are reported to the World Health Organization. Approximately 33,900 (50%) of these cases occur in China (excluding Taiwan) and approximately 51,000 (75%) occur in children aged 0-14 years (incidence: 5.4 per 100,000). Approximately 55,000 (81%) cases occur in areas with well established or developing JE vaccination programmes, while approximately 12,900 (19%) occur in areas with minimal or no JE vaccination programmes. Recent data allowed us to refine the estimate of the global incidence of JE, which remains substantial despite improvements in vaccination coverage. More and better incidence studies in selected countries, particularly China and India, are needed to further refine these estimates.

Scott C. Weaver,  Alan Barrett (2004)
Key Points Many recent viral pandemics have been attributed to the ability of some RNA viruses, for example HIV, dengue virus and possibly the severe acute respiratory syndrome (SARS) coronavirus, to change their host range to include humans. The authors discuss the mechanisms of host-range alteration used by a selection of viruses, including Venezuelan equine and Japanese encephalitis viruses (VEEV and JEV, respectively), dengue virus and West Nile virus (WNV). Venezuelan equine encephalitis (VEE) was first recognized as a disease of horses, donkeys and mules in northern South America during the mid 1930s, but there has been renewed interest in this virus because of its potential as a biological weapon. Molecular analysis of epidemic strains — which exploit horses for amplification — and comparison with strains that do not cause epidemic disease, have shown that a few amino-acid mutations can affect host-range alteration. Changes on the surface of the VEE virion seem to be important for these host range changes. JEV causes epidemics of encephalitis in India, Korea, China, South-East Asia and Indonesia. The disease affects children, and is associated with a mortality rate of greater than 20%. However, unlike VEEV, there is no evidence that JEV undergoes mutation and selection to replicate in different hosts. Pigs amplify transmission in peridomestic settings, and migratory birds have a role in dispersion of JEV. Although different genotypes have been isolated, their relevance to pathology and host range is unclear. WNV is now endemic in the United States after first emerging in New York in 1999. WNV has a very broad host range. Forty-nine species of mosquitoes and ticks, and 225 species of birds are susceptible to infection. Other hosts include horses, cattle, llamas, alligators, cats, dogs, wolves and sheep. Transmission of WNV among these species has not been reported. Although humans are probably dead-end hosts, infection with WNV can cause severe disease. Dengue viruses are very important human arboviral pathogens and use humans as reservoir hosts. Aedes aegypti and Aedes albopictus mosquitoes are the most common vectors in urban settings. It is thought that the human epidemic form of dengue virus evolved in the last 2000 years, and genetic analysis indicates that mutations have resulted in adaptation to the urban mosquito host. However, links between mutations and human pathogenicity have not been established. Finally, the authors discuss how host-range changes can be studied experimentally. Cell-culture model systems can be used to find mutations that correlate with virus fitness and adaptation in different host strains. Viruses that replicate in useful laboratory animal models can also be studied in whole animal hosts.

Andrew van den Hurk,  Scott Ritchie,  John S. Mackenzie (2009)
Japanese encephalitis virus (JEV) (Flavivirus: Flaviviridae) is a leading cause of encephalitis in eastern and southern Asia. The virus is maintained in a zoonotic cycle between ardeid wading birds and/or pigs and Culex mosquitoes. The primary mosquito vector of JEV is Culex tritaeniorhynchus, although species such as Cx. gelidus, Cx. fuscocephala, and Cx. annulirostris are important secondary or regional vectors. Control of JEV is achieved through human and/or swine vaccination, changes in animal husbandry, mosquito control, or a combination of these strategies. This review outlines the ecology of JEV and examines the recent expansion of its geographical range, before assessing its ability to emerge in new regions, using the hypothetical establishment in the United States as a case study.