Clinicopathological significance and potential drug target of CDH1 in breast cancer: a meta-analysis and literature review 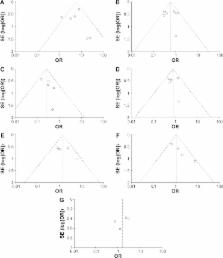 CDH1, as a tumor suppressor gene, contributes sporadic breast cancer (BC) progression. However, the association between CDH1 hypermethylation and BC, and its clinicopathological significance remains unclear. We conducted a meta-analysis to investigate the relationship between the CDH1 methylation profile and the major clinicopathological features. A detailed literature was searched through the electronic databases PubMed, Web of Science™, and EMBASE™ for related research publications. The data were extracted and assessed by two reviewers independently. Odds ratios (ORs) with corresponding confidence intervals (CIs) were calculated and summarized respectively. The frequency of CDH1 methylation was significantly higher in invasive ductal carcinoma than in normal breast tissues (OR =5.83, 95% CI 3.76–9.03, P<0.00001). CDH1 hypermethylation was significantly higher in estrogen receptor (ER)-negative BC than in ER-positive BC (OR =0.62, 95% CI 0.43–0.87, P=0.007). In addition, we found that the CDH1 was significantly methylated in HER2-negative BC than in HER2-positive BC (OR =0.26, 95% CI 0.15–0.44, P<0.00001). However, CDH1 methylation frequency was not associated with progesterone receptor (PR) status, or with grades, stages, or lymph node metastasis of BC patients. Our results indicate that CDH1 hypermethylation is a potential novel drug target for developing personalized therapy. CDH1 hypermethylation is strongly associated with ER-negative and HER2-negative BC, respectively, suggesting CDH1 methylation status could contribute to the development of novel therapeutic approaches for the treatment of ER-negative or HER2-negative BC with aggressive tumor biology.

W Nelson,  Ferric Fang (2004)
The specification and proper arrangements of new cell types during tissue differentiation require the coordinated regulation of gene expression and precise interactions between neighboring cells. Of the many growth factors involved in these events, Wnts are particularly interesting regulators, because a key component of their signaling pathway, beta-catenin, also functions as a component of the cadherin complex, which controls cell-cell adhesion and influences cell migration. Here, we assemble evidence of possible interrelations between Wnt and other growth factor signaling, beta-catenin functions, and cadherin-mediated adhesion.

Cell adhesion and signalling by cadherins and Ig-CAMs in cancer.

β-Catenin pathway activation in breast cancer is associated with triple-negative phenotype but not with CTNNB1 mutation.

Alan Mackay,  Helio Bagetti Filho,  Rachael Natrajan … (2011)
Aberrant β-catenin expression as determined by assessment of its subcellular localization constitutes a surrogate marker of Wnt signalling pathway activation and has been reported in a subset of breast cancers. The association of β-catenin/Wnt pathway activation with clinical outcome and the mechanisms leading to its activation in breast cancers still remain a matter of controversy. The aims of this study were to address the distribution of β-catenin expression in invasive breast cancers, the correlations between β-catenin expression and clinicopathological features and survival of breast cancer patients, and to determine whether aberrant β-catenin expression is driven by CTNNB1 (β-catenin encoding gene) activating mutations. Immunohistochemistry was performed on a tissue microarray containing 245 invasive breast carcinomas from uniformly treated patients, using two anti-β-catenin monoclonal antibodies. Selected samples were subjected to CTNNB1 exon 3 mutation analysis by direct gene sequencing. A good correlation between the two β-catenin antibodies was observed (Spearman's r >0.62, P<0.001). Respectively, 31 and 11% of the cases displayed lack/reduction of β-catenin membranous expression and nuclear accumulation. Complete lack of β-catenin expression was significantly associated with invasive lobular carcinoma histological type. Subgroup analysis of non-lobular cancers or non-lobular grade 3 carcinomas revealed that lack/reduction of β-catenin membranous expression and/or nuclear accumulation were significantly associated with oestrogen receptor negativity, absence of HER2 gene amplification and overexpression, lack/reduction of E-cadherin expression and tumours of triple-negative and basal-like phenotype. Univariate survival analysis revealed a significant association between β-catenin nuclear expression and shorter metastasis-free and overall survival in the whole cohort; however, β-catenin nuclear expression was not an independent predictor of outcome in multivariate analysis. No CTNNB1 mutations were identified in the 28 selected breast carcinomas analysed. In conclusion, β-catenin/Wnt pathway activation is preferentially found in triple-negative/basal-like breast carcinomas, is associated with poor clinical outcome and is unlikely to be driven by CTNNB1 mutations in breast cancer.

All authors contributed equally to this work