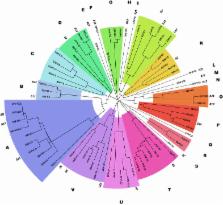 The major histocompatibility complex (MHC) is present within the genomes of all jawed vertebrates. MHC genes are especially important in regulating immune responses, but even after over 80 years of research on the MHC, much remains to be learned about how it influences adaptive and innate immune responses. In most species, the MHC is highly polymorphic and polygenic. Strong and highly reproducible associations are established for chicken MHC- B haplotypes in a number of infectious diseases. Here, we report (1) the development of a high-density SNP (single nucleotide polymorphism) panel for MHC- B typing that encompasses a 209,296 bp region in which 45 MHC- B genes are located, (2) how this panel was used to define chicken MHC- B haplotypes within a large number of lines/breeds and (3) the detection of recombinants which contributes to the observed diversity.

A SNP panel was developed for the MHC- B region between the BG2 and CD1A1 genes. To construct this panel, each SNP was tested in end-point read assays on more than 7500 DNA samples obtained from inbred and commercially used egg-layer lines that carry known and novel MHC- B haplotypes. One hundred and one SNPs were selected for the panel. Additional breeds and experimentally-derived lines, including lines that carry MHC- B recombinant haplotypes, were then genotyped.

Andreas Kranis, Almas A. Gheyas, Clarissa Boschiero … (2013)
Background High density (HD) SNP genotyping arrays are an important tool for genetic analyses of animals and plants. Although the chicken is one of the most important farm animals, no HD array is yet available for high resolution genetic analysis of this species. Results We report here the development of a 600 K Affymetrix® Axiom® HD genotyping array designed using SNPs segregating in a wide variety of chicken populations. In order to generate a large catalogue of segregating SNPs, we re-sequenced 243 chickens from 24 chicken lines derived from diverse sources (experimental, commercial broiler and layer lines) by pooling 10–15 samples within each line. About 139 million (M) putative SNPs were detected by mapping sequence reads to the new reference genome (Gallus_gallus_4.0) of which ~78 M appeared to be segregating in different lines. Using criteria such as high SNP-quality score, acceptable design scores predicting high conversion performance in the final array and uniformity of distribution across the genome, we selected ~1.8 M SNPs for validation through genotyping on an independent set of samples (n = 282). About 64% of the SNPs were polymorphic with high call rates (>98%), good cluster separation and stable Mendelian inheritance. Polymorphic SNPs were further analysed for their population characteristics and genomic effects. SNPs with extreme breach of Hardy-Weinberg equilibrium (P < 0.00001) were excluded from the panel. The final array, designed on the basis of these analyses, consists of 580,954 SNPs and includes 21,534 coding variants. SNPs were selected to achieve an essentially uniform distribution based on genetic map distance for both broiler and layer lines. Due to a lower extent of LD in broilers compared to layers, as reported in previous studies, the ratio of broiler and layer SNPs in the array was kept as 3:2. The final panel was shown to genotype a wide range of samples including broilers and layers with over 100 K to 450 K informative SNPs per line. A principal component analysis was used to demonstrate the ability of the array to detect the expected population structure which is an important pre-investigation step for many genome-wide analyses. Conclusions This Affymetrix® Axiom® array is the first SNP genotyping array for chicken that has been made commercially available to the public as a product. This array is expected to find widespread usage both in research and commercial application such as in genomic selection, genome-wide association studies, selection signature analyses, fine mapping of QTLs and detection of copy number variants.

A review of the development of chicken lines to resolve genes determining resistance to diseases.

L.D. Bacon, H.D. HUNT, H.H. Cheng (2000)
The resolution of genes that determine resistance to disease is described using chicken lines maintained at the Avian Disease and Oncology Laboratory (ADOL). This description includes a summary 1) of existing selected and inbred lines differing for resistance to viral-induced tumors, i.e., Marek's disease (MD) and lymphoid leukosis (LL), and of the use of inbred and line crosses to define relevant disease-resistant genes, e.g., TV, ALVE, B, R, LY4, TH1, BU1, and IGG1; 2) of the development of TVB*/ALVE congenic lines to establish the affects of endogenous virus (EV) expression on resistance to avian leukosis virus (ALV), and methods to detect ALVE expression; 3) of the development of B congenic lines to define the influence of the MHC on MD resistance and vaccinal immunity, for producing B antisera, and for evaluating DNA sequences of Class I and II genes; and 4) of the current development of 6C.7 recombinant congenic strains (RCS) to define the role of non-MHC genes influencing susceptibility to MD and LL tumors, immune competence, and epistatic effects of genes. The procedures of pedigree mating, to avoid or maintain inbreeding, and of blood-typing, to ensure genetic purity of the lines, are also described.

Kirsty Worley, Julie M. Collet, Lewis Spurgin … (2010)
Genes of the major histocompatibility complex (MHC) form a vital part of the vertebrate immune system and play a major role in pathogen resistance. The extremely high levels of polymorphism observed at the MHC are hypothesised to be driven by pathogen-mediated selection. Although the exact nature of selection remains unclear, three main hypotheses have been put forward; heterozygote advantage, negative frequency-dependence and fluctuating selection. Here, we report the effects of MHC genotype on survival in a cohort of semi-natural red junglefowl (Gallus gallus) that suffered severe mortality as a result of an outbreak of the disease coccidiosis. The cohort was followed from hatching until 250 days of age, approximately the age of sexual maturity in this species, during which time over 80% of the birds died. We show that on average birds with MHC heterozygote genotypes survived infection longer than homozygotes and that this effect was independent of genome-wide heterozygosity, estimated across microsatellite loci. This MHC effect appeared to be caused by a single susceptible haplotype (CD_c) the effect of which was masked in all heterozygote genotypes by other dominant haplotypes. The CD_c homozygous genotype had lower survival than all other genotypes, but CD_c heterozygous genotypes had survival probabilities equal to the most resistant homozygote genotype. Importantly, no heterozygotes conferred greater resistance than the most resistant homozygote genotype, indicating that the observed survival advantage of MHC heterozygotes was the product of dominant, rather than overdominant processes. This pattern and effect of MHC diversity in our population could reflect the processes ongoing in similarly small, fragmented natural populations.