As Time Goes by: Anxiety Negatively Affects the Perceived Quality of Life in Patients With Type 2 Diabetes of Long Duration 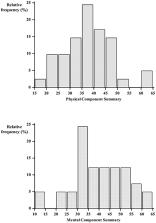 Our study suggests a predictive role of both anxiety levels and time since diagnosis in perceived HRQoL in T2DM patients. PCS was associated with anxiety and time since diagnosis and MCS was associated with anxiety and depressive symptoms but not with diabetes duration or metabolic control. These data could be useful to plan T2DM training programs focused on psychological health concerns, possibly leading to a healthy self-management and a better perceived HRQoL, even assisting patients in reducing the negative effect due to the chronicization of T2DM.

Janice Kiecolt-Glaser,  Lynanne McGuire,  Theodore Robles … (2002)
Negative emotions can intensify a variety of health threats. We provide a broad framework relating negative emotions to a range of diseases whose onset and course may be influenced by the immune system; inflammation has been linked to a spectrum of conditions associated with aging, including cardiovascular disease, osteoporosis, arthritis, type 2 diabetes, certain cancers, Alzheimer's disease, frailty and functional decline, and periodontal disease. Production of proinflammatory cytokines that influence these and other conditions can be directly stimulated by negative emotions and stressful experiences. Additionally, negative emotions also contribute to prolonged infection and delayed wound healing, processes that fuel sustained proinflammatory cytokine production. Accordingly, we argue that distress-related immune dysregulation may be one core mechanism behind a large and diverse set of health risks associated with negative emotions. Resources such as close personal relationships that diminish negative emotions enhance health in part through their positive impact on immune and endocrine regulation.

G Apolone,  P. Mosconi (1998)
This article reports on the development and validation of the Italian SF-36 Health Survey using data from seven studies in which an Italian version of the SF-36 was administered to more than 7000 subjects between 1991 and 1995. Empirical findings from a wide array of studies and diseases indicate that the performance of the questionnaire improved as the Italian translation was revised and that it met the standards suggested by the literature in terms of feasibility, psychometric tests, and interpretability. This generally satisfactory picture strengthens the idea that the Italian SF-36 is as valid and reliable as the original instrument and applicable and valid across age, gender, and disease. Empirical evidence from a cross-sectional survey carried out to norm the final version in a representative sample of 2031 individuals confirms the questionnaire's characteristics in terms of hypothesized constructs and psychometric behavior and gives a better picture of its external validity (i.e., robustness and generalizability) when administered in settings that are very close to real world.

The inflammatory response is an integral part of the stress response: Implications for atherosclerosis, insulin resistance, type II diabetes and metabolic syndrome X.

Paul H. Black (2003)
In previous publications, we presented the hypothesis that repeated episodes of acute or chronic psychological stress could induce an acute phase response (APR) and subsequently a chronic inflammatory process such as atherosclerosis. In this paper, that hypothesis, namely that such stress can induce an APR and inflammation, has been extended to include a chronic inflammatory process(s), characterized by the presence of certain cytokines and acute phase reactants (APR), which is associated with certain metabolic diseases. The loci of origin of these cytokines, particularly interleukin 6 (IL-6), and their induction, has been considered. Evidence is presented that the liver, the endothelium, and fat cell depots are the primary sources of cytokines, particularly IL-6, and that IL-6 and the acute phase protein (APP), C-reactive protein (CRP), are strongly associated with, and likely play a dominant role in, the development of this inflammatory process which leads to insulin resistance, non-insulin dependent diabetes mellitus type II, and Metabolic syndrome X. The possible role of psychological stress and the major stress-related hormones as etiologic factors in the pathogenesis of these metabolic diseases, as well as atherosclerosis, is discussed. The fact that stress can activate an APR, which is part of the innate immune inflammatory response, is evidence that the inflammatory response is contained within the stress response or that stress can induce an inflammatory response. The evidence that the stress, inflammatory, and immune systems all evolved from a single cell, the phagocyte, is further evidence for their intimate relationship which almost certainly was maintained throughout evolution.

This article was submitted to Psychology for Clinical Settings, a section of the journal Frontiers in Psychology