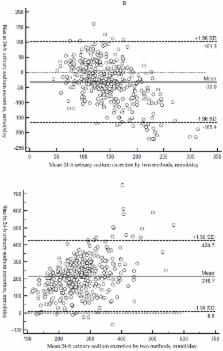 R. D. Mattes,  D. Donnelly (1991)
Information on the relative contributions of all dietary sodium (Na) sources is needed to assess the potential efficacy of manipulating the component parts in efforts to implement current recommendations to reduce Na intake in the population. The present study quantified the contributions of inherently food-borne, processing-added, table, cooking, and water sources in 62 adults who were regular users of discretionary salt to allow such an assessment. Seven-day dietary records, potable water collections, and preweighted salt shakers were used to estimate Na intake. Na added during processing contributed 77% of total intake, 11.6% was derived from Na inherent to food, and water was a trivial source. The observed table (6.2%) and cooking (5.1%) values may overestimate the contribution of these sources in the general population due to sample characteristics, yet they were still markedly lower than previously reported values. These findings, coupled with similar observations from other studies, indicate that reduction of discretionary salt will contribute little to moderation of total Na intake in the population.