Animal and Human Brucellosis in Pakistan 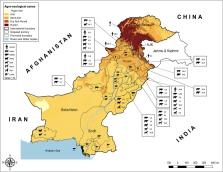 Brucellosis is a bacterial zoonotic disease that affects many animal species and can be transmitted to humans via direct contact or via contaminated food. Although brucellosis is a serious health hazard, its public health concern has been neglected in many countries. In some developing countries, such as Pakistan, where brucellosis is endemic, this disease continues to be of importance. A literature search for the past 11 years (2011–2021) provided a comprehensive insight into brucellosis in Pakistan. In this review, particular emphasis was placed on occurrence, diagnostic tests used, and prevention, treatment, and control in the context of the “One Health” approach.

E Díaz Aparicio (2013)
Brucellosis is a disease that causes severe economic losses for livestock farms worldwide. Brucella melitensis, B. abortus and B. suis, which are transmitted between animals both vertically and horizontally, cause abortion and infertility in their primary natural hosts - goats and sheep (B. melitensis), cows (B. abortus) and sows (B. suis). Brucella spp. infect not only their preferred hosts but also other domestic and wild animal species, which in turn can act as reservoirs of the disease for other animal species and humans. Brucellosis is therefore considered to be a major zoonosis transmitted by direct contact with animals and/or their secretions, or by consuming milk and dairy products.

Comparisons of brucellosis between human and veterinary medicine

Noah Hull,  Brant A. Schumaker (2018)
ABSTRACT Brucellosis is the world’s most widespread zoonosis, but also ranks as one of the seven most neglected diseases, according to the World Health Organization. Additionally, it is recognized as the world’s most common laboratory-acquired infection. There are a reported 500,000 incident cases of human brucellosis per year. However, true incidence is estimated to be 5,000,000 to 12,500,000 cases annually. Once diagnosed, focus is directed at treating individual patients with antibiotic regimes, yet overall neglecting the animal reservoir of disease. Countries with the highest incidence of human brucellosis are Syria (1,603.4 cases per 1,000,000 individuals), Mongolia (391.0), and Tajikistan (211.9). Surveillance on animal populations is lacking in many developed and developing countries. According to the World Animal Health Information Database, Mexico had the largest number of reported outbreaks, 5,514 in 2014. Mexico is followed by China (2,138), Greece (1,268), and Brazil (1,142). The majority of these outbreaks is Brucella abortus, the etiologic agent of bovine brucellosis. Brucellosis is an ancient disease that still plagues the world. There are still knowledge gaps and a need for better diagnostics and vaccines to make inroads towards control and eradication.

This article was submitted to Public Health Education and Promotion, a section of the journal Frontiers in Public Health