On Aethiopomyia Malloch (Diptera, Muscidae) with the revision of the type specimens deposited in the Museum für Naturkunde, Berlin (Germany) with a key to species 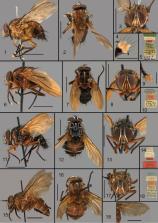 Aethiopomyia Malloch ( Diptera , Muscidae ) is a small genus with occurrence restricted to the Afrotropical region. Only five species are currently known in this genus: A. patersoni Zumpt, 1969, A. williamsi Snyder, 1951, A. arguta (Karsch, 1879), A. steini Curran, 1935, and A. gigas (Stein, 1906). All Aethiopomyia species are large, reaching up to 15 mm, as in A. patersoni and the most visible differences among them are based in the color pattern of the body. The species are mostly yellow, with a broad scutum and abdomen, males and females are dichoptic, the anepimeron is haired and they have stubby spines on the upper side of the palpi. Phylogenetically, Aethiopomyia , together with two other genera restricted to the Afrotropical region, Alluaudinella Giglio-Tos and Ochromusca Malloch, appear to form a monophyletic group, defined by the presence of the remarkably short stubby spines on the upper side of the palpi. Four species deposited in the Museum für Naturkunde, Berlin (Germany) were analyzed; three of them are types. Diagnosis for all species, colored illustrations, male dissections and illustrations and a key to separate them are presented herein.

James O’Hara,  Christopher Raper,  Adrian Pont … (2013)
Abstract The monotypic genera Paleotachina Townsend, 1921 and Electrotachina Townsend, 1938 were originally described as fossils in amber but were later discovered to be inclusions in copal. Both taxa were originally assigned to the Tachinidae (Diptera) and this placement has continued to the present day. The holotypes of the two type species, P. smithii Townsend and E. smithii Townsend, were examined and the following taxonomic and nomenclatural changes are proposed: Paleotachina is transferred to the Muscidae and placed in synonymy with Aethiopomyia Malloch, 1921, syn. n.; P. smithii Townsend, type species of Paleotachina, is synonymized with Aethiopomyia gigas (Stein, 1906), syn. n.; Electrotachina is transferred to the Sarcophagidae and placed in synonymy with Dolichotachina Villeneuve, 1913, syn. n.; E. smithii Townsend, type species of Electrotachina, is recognized as a valid species of Dolichotachina comb. n. Images of the holotypes of P. smithii and E. smithii are provided and features that have helped place these copal inclusions in their new combinations are discussed.

Notes on the genus Aethiopomyia Malloch (Diptera: Muscidae) with a new species from Tanzania.