Fetal Growth versus Birthweight: The Role of Placenta versus Other Determinants 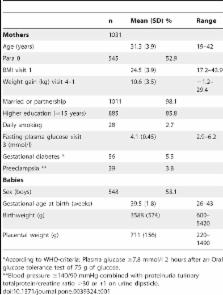 Kathleen Abu-Saad,  Drora Fraser (2009)
In this review, the authors summarize current knowledge on maternal nutritional requirements during pregnancy, with a focus on the nutrients that have been most commonly investigated in association with birth outcomes. Data sourcing and extraction included searches of the primary resources establishing maternal nutrient requirements during pregnancy (e.g., Dietary Reference Intakes), and searches of Medline for "maternal nutrition"/[specific nutrient of interest] and "birth/pregnancy outcomes," focusing mainly on the less extensively reviewed evidence from observational studies of maternal dietary intake and birth outcomes. The authors used a conceptual framework which took both primary and secondary factors (e.g., baseline maternal nutritional status, socioeconomic status of the study populations, timing and methods of assessing maternal nutritional variables) into account when interpreting study findings. The authors conclude that maternal nutrition is a modifiable risk factor of public health importance that can be integrated into efforts to prevent adverse birth outcomes, particularly among economically developing/low-income populations.

P M Emmett,  David Dunger,  Kathryn Preece … (2002)
There is remarkably wide variation in rates of infancy growth, however, its regulation is not well understood. We examined the relationship between maternal smoking, parity, and breast- or bottle-feeding to size at birth and childhood growth between 0 and 5 y in a large representative birth cohort. A total of 1,335 normal infants had weight, length/height, and head circumference measured at birth and on up to 10 occasions to 5 y old. Multilevel modeling (MLwiN) was used to analyze longitudinal growth data. Infants of maternal smokers were symmetrically small at birth (p < 0.0005) compared with infants of nonsmokers, however, showed complete catch-up growth over the first 12 mo. In contrast, infants of primiparous pregnancies were thin at birth (p < 0.0005), showed dramatic catch-up growth, and were heavier and taller than infants of nonprimiparous pregnancies from 12 mo onwards. Breast-fed infants were similar in size at birth than bottle-fed infants, but grew more slowly during infancy. Among infants who showed catch-up growth, males caught up more rapidly than females (p = 0.002). In conclusion, early postnatal growth rates are strongly influenced by a drive to compensate for antenatal restraint or enhancement of fetal growth by maternal-uterine factors. The mechanisms that signal catch-up or catch-down growth are unknown but may involve programming of appetite. The importance of nutrition on early childhood growth is emphasized by the marked difference in growth rates between breast- and bottle-fed infants. The sequence of fetal growth restraint and postnatal catch-up growth may predispose to obesity risk in this contemporary population.

Publisher ID: PONE-D-12-02779
DOI: 10.1371/journal.pone.0039324
PMC ID: 3377679
PubMed ID: 22723995
Copyright statement: Roland et al. This is an open-access article distributed under the terms of the Creative Commons Attribution License, which permits unrestricted use, distribution, and reproduction in any medium, provided the original author and source are credited.