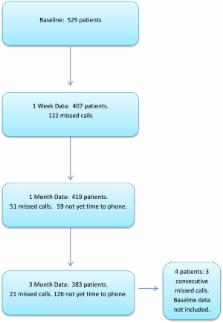 Acute (< 4 weeks) (n = 274) and chronic (> 3 months) (n = 255) neck pain patients with no chiropractic or manual therapy in the prior 3 months were included. Patients completed the numerical pain rating scale (NRS) and Bournemouth questionnaire (BQ) at baseline prior to treatment. At 1 week, 1 month and 3 months after start of treatment the NRS and BQ were completed along with the Patient Global Impression of Change (PGIC) scale. Demographic information was provided by the clinician. Improvement at each of the follow up points was categorized using the PGIC. Multivariate regression analyses were done to determine significant independent predictors of improvement.

Baseline mean neck pain and total disability scores were significantly (p < 0.001and p < 0.008 respectively) higher in acute patients. Both groups reported significant improvement at all data collection time points, but was significantly larger for acute patients. The PGIC score at 1 week (OR = 3.35, 95% CI = 1.13-9.92) and the baseline to 1 month BQ total change score (OR = 1.07, 95% CI = 1.03-1.11) were identified as independent predictors of improvement at 3 months for acute patients. Chronic patients who reported improvement on the PGIC at 1 month were more likely to be improved at 3 months (OR = 6.04, 95% CI = 2.76-13.69). The presence of cervical radiculopathy or dizziness was not predictive of a negative outcome in these patients.

The most consistent predictor of clinically relevant improvement at both 1 and 3 months after the start of chiropractic treatment for both acute and chronic patients is if they report improvement early in the course of treatment. The co-existence of either radiculopathy or dizziness however do not imply poorer prognosis in these patients.

The prevalence of neck pain in the world population: a systematic critical review of the literature.

Jan Hartvigsen,  René Fejer,  Kirsten Ohm Kyvik (2006)
The objective of this study was to determine the prevalence of neck pain (NP) in the world population and to identify areas of methodological variation between studies. A systematic search was conducted in five databases (MEDLINE, EMBASE, CINAHL, OSH-ROM, and PsycINFO), followed by a screening of reference lists of relevant papers. Included papers were extracted for information and each paper was given a quality score. Mean prevalence estimates were calculated for six prevalence periods (point, week, month, 6 months, year, and lifetime), and considered separately for age, gender, quality score, response rate, sample size, anatomical definition, geography, and publication year. Fifty-six papers were included. The six most commonly reported types of prevalence were point, week, month, 6 months, year, and lifetime. Except for lifetime prevalence, women reported more NP than men. For 1-year prevalence, Scandinavian countries reported more NP than the rest of Europe and Asia. Prevalence estimates were not affected by age, quality score, sample size, response rate, and different anatomical definitions of NP. NP is a common symptom in the population. As expected, the prevalence increases with longer prevalence periods and generally women have more NP than men. At least for 1-year prevalence Scandinavian countries report higher mean estimates than the rest of Europe and Asia. The quality of studies varies greatly but is not correlated with the prevalence estimates. Design varies considerably and standardisation is needed in future studies.

A clinical prediction rule to identify patients with low back pain most likely to benefit from spinal manipulation: a validation study.