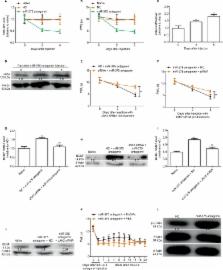 Several lines of evidence indicate that microRNAs (miRNAs) modulate tolerance to the analgesic effects of morphine via regulation of pain-related genes, making dysregulation of miRNA levels a clinical target for controlling opioid tolerance. However, the precise mechanisms by which miRNAs regulate opioid tolerance are unclear. In the present study, we noted that the miR-375 level was downregulated but the expression of Janus kinase 2 (JAK2) was upregulated in mouse dorsal root ganglia (DRG) following chronic morphine treatment. The miR-375 levels and JAK2 expression were correlated with the progression of morphine tolerance, and upregulation of miR-375 level could significantly hinder morphine tolerance. This was ameliorated by JAK2 knockdown. Prolonged morphine exposure induced the expression of brain-derived neurotrophic factor (BDNF) in a time-dependent manner in the DRG. This was regulated by the miR-375 and JAK2–signal transducer and activator of transcription 3 (STAT3) pathway, and inhibition of this pathway decreased BDNF production, and thus, attenuated morphine tolerance. More importantly, we found that miR-375 could target JAK2 and increase BDNF expression in a JAK2/STAT3 pathway-dependent manner.

A new and sensitive method for measuring thermal nociception in cutaneous hyperalgesia.

Mark Brown,  Sonia Flores,  R Dubner … (1987)
A method to measure cutaneous hyperalgesia to thermal stimulation in unrestrained animals is described. The testing paradigm uses an automated detection of the behavioral end-point; repeated testing does not contribute to the development of the observed hyperalgesia. Carrageenan-induced inflammation resulted in significantly shorter paw withdrawal latencies as compared to saline-treated paws and these latency changes corresponded to a decreased thermal nociceptive threshold. Both the thermal method and the Randall-Selitto mechanical method detected dose-related hyperalgesia and its blockade by either morphine or indomethacin. However, the thermal method showed greater bioassay sensitivity and allowed for the measurement of other behavioral parameters in addition to the nociceptive threshold.

JAK/STAT3 pathway is activated in spinal cord microglia after peripheral nerve injury and contributes to neuropathic pain development in rat.

Elisa Dominguez,  Annie Mauborgne,  Cyril Rivat … (2008)
Peripheral nerve lesion leads to the production of interleukin 6 (IL-6)-related neuropoietic cytokines involved in nerve protection and regeneration. This family of cytokines mainly signal through the signal transducer and activator of transcription (STAT) pathway that is locally activated in injured nerves. IL-6 is also involved in pain that frequently arises from peripheral nerve lesion. We investigated the possible activation of this major IL-6 signaling system in the spinal cord after peripheral nerve injury and its role in neuropathic pain. Ligation of L5-L6 spinal nerves (SNL) evoked an accumulation of active, phosphorylated form of STAT3 in microglial cells of dorsal spinal cord mostly in projection areas of injured nerves. SNL resulted also in a massive induction of IL-6 mRNA expression in dorsal root ganglia and increased concentration of IL-6 in dorsal spinal cord. Intrathecal injection of anti-rat IL-6 antibodies prevented the SNL-induced accumulation of phospho-STAT3 in the spinal cord. STAT3 pathway blockade with Janus kinase 2 inhibitor AG490 attenuated both mechanical allodynia and thermal hyperalgesia in SNL rats. These data show that in response to SNL injury Janus kinase/STAT3 system is activated mainly through IL-6 signaling in spinal microglia and that this transduction pathway participates in development of pain associated with nerve alteration.

B.T. Aldrich,  E.P. Frakes,  J Kasuya … (2009)
Chronic neuropathic pain caused by peripheral nerve injury is associated with global changes in gene expression in damaged neurons. To understand the molecular mechanisms underlying neuropathic pain, it is essential to elucidate how nerve injury alters gene expression and how the change contributes to the development and maintenance of chronic pain. MicroRNAs are non-protein-coding RNA molecules that regulate gene expression in a wide variety of biological processes mainly at the level of translation. This study investigated the possible involvement of microRNAs in gene regulation relevant to neuropathic pain. The analyses focused on a sensory organ-specific cluster of microRNAs that includes miR-96, -182, and -183. Quantitative real-time polymerase chain reaction (qPCR) analyses confirmed that these microRNAs were highly enriched in the dorsal root ganglion (DRG) of adult rats. Using the L5 spinal nerve ligation (SNL) model of chronic neuropathic pain, we observed a significant reduction in expression of these microRNAs in injured DRG neurons compared to controls. In situ hybridization and immunohistochemical analyses revealed that these microRNAs are expressed in both myelinated (N52 positive) and unmyelinated (IB4 positive) primary afferent neurons. They also revealed that the intracellular distributions of the microRNAs in DRG neurons were dramatically altered in animals with mechanical hypersensitivity. Whereas microRNAs were uniformly distributed within the DRG soma of non-allodynic animals, they were preferentially localized to the periphery of neurons in allodynic animals. The redistribution of microRNAs was associated with changes in the distribution of the stress granule (SG) protein, T-cell intracellular antigen 1 (TIA-1). These data demonstrate that SNL induces changes in expression levels and patterns of miR-96, -182, and -183, implying their possible contribution to chronic neuropathic pain through translational regulation of pain-relevant genes. Moreover, SGs were suggested to be assembled and associated with microRNAs after SNL, which may play a role in modification of microRNA-mediated gene regulation in DRG neurons.