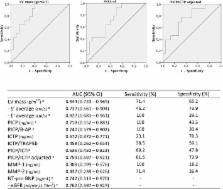 Cardiomyopathy is a major determinant of overall Fabry disease ( FD) prognosis, with the worst outcomes in patients with myocardial fibrosis. Late gadolinium enhancement is currently the gold standard for evaluation of replacement myocardial fibrosis; however, this event is irreversible, thus identification of biomarkers of earlier diffuse fibrosis is paramount.

Type I collagen synthesis and degradation biomarkers (PICP [carboxyterminal propeptide of procollagen type I], ICTP [carboxyterminal telopeptide of type I collagen], and MMP1 [matrix metalloproteinase 1] and MMP2) and markers of bone synthesis and degradation were evaluated (to adjust type I collagen metabolism to bone turnover) in FD patients and controls. FD patients were grouped by cardiomyopathy severity, according to echocardiogram: (1) normal, (2) tissue Doppler abnormalities, (3) left ventricular hypertrophy. A significant increase in PICP and a significant decrease in matrix metalloproteinases were observed in FD patients; even the group with normal echocardiogram had a significant increase in PICP. We also found a significant correlation between left ventricular mass and PICP (ρ=0.378, P=0.003) and MMP1 (ρ=−0.484, P<0.001). PICP (adjusted for bone turnover) was the better predictor of left ventricular mass in multivariable regression, and its diagnostic accuracy to predict late gadolinium enhancement was also significant.

Collagen type I synthesis is increased in FD cardiomyopathy, even in the earlier stages of the disease, and this profibrotic state has good predictive value for and is likely to be critical to the development of overt left ventricular hypertrophy. Moreover, inhibition of enzymes involved in collagen type I cleavage also seems crucial to myocardial collagen deposition.

Myocardial fibrosis as an early manifestation of hypertrophic cardiomyopathy.

P Elliott,  A Linhart,  R Giugliani … (2009)
Fabry disease is a rare X-linked lysosomal storage disorder characterised by severe multisystemic involvement that leads to major organ failure and premature death in affected men and women. Over the past 7 years, the Fabry Outcome Survey (FOS) has collected data on the natural history of Fabry disease, and the long-term efficacy and safety of enzyme-replacement therapy. This paper provides an update on the first analysis of FOS data. Baseline data on clinical manifestations and causes of death in a cohort of 1453 patients (699 male, 754 female) from 19 countries worldwide were analysed. Causes of death of affected relatives were analysed separately. The most frequently reported signs and symptoms of Fabry disease were neurological. Cardiac, ocular, gastrointestinal, dermatological, auditory and renal manifestations were also common. The principal causes of death among 181 affected relatives of patients in FOS (most of whom had died before 2001) were renal failure in males (42%) and cerebrovascular disease in females (25%). In contrast, of the 42 patients enrolled in FOS whose deaths were reported between 2001 and 2007, cardiac disease was the main cause of death in both male (34%) and female (57%) patients. These data suggest that the importance of renal disease as a cause of death in patients with Fabry disease is decreasing while the importance of cardiac disease is increasing. This pattern probably reflects improvements in the management of renal disease in patients with Fabry disease.

The Mainz Severity Score Index: a new instrument for quantifying the Anderson-Fabry disease phenotype, and the response of patients to enzyme replacement therapy.

F Baehner,  M Bajbouj,  C Whybra … (2004)
Anderson-Fabry disease (AFD) is an X-linked disorder caused by deficient activity of the lysosomal enzyme alpha-galactosidase A. The availability of enzyme replacement therapy (ERT) for this debilitating condition has led to the need for a convenient and sensitive instrument to monitor clinical effects in an individual patient. This study aimed to develop a scoring system--the Mainz Severity Score Index (MSSI)--to measure the severity of AFD and to monitor the clinical course of the disease in response to ERT. Thirty-nine patients (24 males and 15 females) with AFD were assessed using the MSSI immediately before and 1 year after commencing agalsidase alfa ERT. Control data were obtained from 23 patients in whom AFD was excluded. The MSSI of patients with AFD was significantly higher than that of patients with other severe debilitating diseases. The MSSI indicated that, although more men than women had symptoms classified as severe, overall, the median total severity scores were not significantly different between male and female patients. One year of ERT with agalsidase alfa led, in all patients, to a significant (p < 0.001) reduction in MSSI score (by a median of nine points). This study has shown that the MSSI score may be a useful, specific measure for objectively assessing the severity of AFD and for monitoring ERT-related treatment effects.