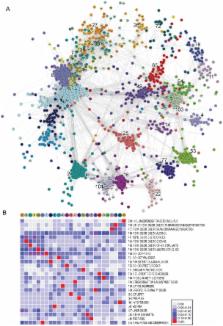 Electronic patient records remain a rather unexplored, but potentially rich data source for discovering correlations between diseases. We describe a general approach for gathering phenotypic descriptions of patients from medical records in a systematic and non-cohort dependent manner. By extracting phenotype information from the free-text in such records we demonstrate that we can extend the information contained in the structured record data, and use it for producing fine-grained patient stratification and disease co-occurrence statistics. The approach uses a dictionary based on the International Classification of Disease ontology and is therefore in principle language independent. As a use case we show how records from a Danish psychiatric hospital lead to the identification of disease correlations, which subsequently can be mapped to systems biology frameworks.

Text mining and information extraction can be seen as the challenge of converting information hidden in text into manageable data. We have used text mining to automatically extract clinically relevant terms from 5543 psychiatric patient records and map these to disease codes in the International Classification of Disease ontology (ICD10). Mined codes were supplemented by existing coded data. For each patient we constructed a phenotypic profile of associated ICD10 codes. This allowed us to cluster patients together based on the similarity of their profiles. The result is a patient stratification based on more complete profiles than the primary diagnosis, which is typically used. Similarly we investigated comorbidities by looking for pairs of disease codes cooccuring in patients more often than expected. Our high ranking pairs were manually curated by a medical doctor who flagged 93 candidates as interesting. For a number of these we were able to find genes/proteins known to be associated with the diseases using the OMIM database. The disease-associated proteins allowed us to construct protein networks suspected to be involved in each of the phenotypes. Shared proteins between two associated diseases might provide insight to the disease comorbidity.

A simple algorithm for identifying negated findings and diseases in discharge summaries.

Wendy W. Chapman,  Will Bridewell,  Paul Hanbury … (2001)
Narrative reports in medical records contain a wealth of information that may augment structured data for managing patient information and predicting trends in diseases. Pertinent negatives are evident in text but are not usually indexed in structured databases. The objective of the study reported here was to test a simple algorithm for determining whether a finding or disease mentioned within narrative medical reports is present or absent. We developed a simple regular expression algorithm called NegEx that implements several phrases indicating negation, filters out sentences containing phrases that falsely appear to be negation phrases, and limits the scope of the negation phrases. We compared NegEx against a baseline algorithm that has a limited set of negation phrases and a simpler notion of scope. In a test of 1235 findings and diseases in 1000 sentences taken from discharge summaries indexed by physicians, NegEx had a specificity of 94.5% (versus 85.3% for the baseline), a positive predictive value of 84.5% (versus 68.4% for the baseline) while maintaining a reasonable sensitivity of 77.8% (versus 88.3% for the baseline). We conclude that with little implementation effort a simple regular expression algorithm for determining whether a finding or disease is absent can identify a large portion of the pertinent negatives from discharge summaries.

Publisher ID: PCOMPBIOL-D-11-00196
DOI: 10.1371/journal.pcbi.1002141
PMC ID: 3161904
PubMed ID: 21901084
Copyright statement: Roque et al. This is an open-access article distributed under the terms of the Creative Commons Attribution License, which permits unrestricted use, distribution, and reproduction in any medium, provided the original author and source are credited.